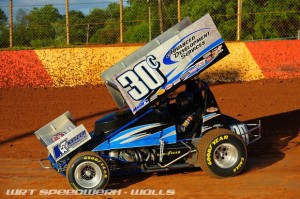 Mechanicsburg, PA — (May 18, 2012) — Lance Dewease of Fayetteville won for the 80th time in his sprint car career at Williams Grove Speedway on Friday night, taking the lead from Sheldon Haudenschild at the halfway point to pocket the victory in the Lawrence Chevrolet 410 sprint car division.

In the Tool Shed of America 358 sprints, Rodney Westhafer won at the oval for the first time in his career.

Haudenshild was smooth and straight, pounding the high cushion once he got going but saw his pace halted with six away when Cliff Brian flipped on the backstretch.

Curt Michael trailed Haudenshild for the restart with Dewease up to third.

Dewease disposed of Michael on the restart and pressured Haudenschild but the leader seemed unphazed by his attempts and instead pulled away from his challenger.

But his pace was again slowed with 12 away, this time for a blown left front on Rick Lafferty?s mount.

Dewease ducked low under Haudenschild for control when action resumed but Haudenschild didn?t give up easily, instead re-passing Dewease as the pair traversed the backstretch before Dewease dove low in turn three to take the lead for good.

Though Haudenschild hung tough for several laps, he had settled into second when the race slowed for a final time with seven laps left, this time for a blown left rear on Brent Marks? machine.

Haudenschild proved to be a player all the way to the finish as Dewease jetted away at the new green with Fred Rahmer third, Danny Dietrich in fourth and Brian Moneith in fifth.

Rahmer relegated Haudenschild to third with five to go and a three-car battle for third developed all the way to the finish that saw the checkers and red flag fly simultaneously.

It was Dietrich who was challenging for third just after the white flag that got out of shape while trying to fend off a rebound by Haudenschild.

And as the pair crossed under the backstretch bridge, Dietrich got on the binders to avoid crashing which in turn sent Brian Montieth up over his tail tank and into a flip.

Heats for the 31-car field went to Montieth, Michael and Dewease with Lafferty scoring the consolation race.

Westhafer started second in the 20-lap 358 sprint main and wired the field for the win, his first ever at Williams Grove.

He had to fend off the challenges of seventh starter Eric Tomecek over the final 10 laps as the Abbottstown speedster pressured after zooming up to second by the third circuit.

It was after Westhafer had encountered the rear of the field that Tomecek was really able to close but Westhafer played it smart in traffic to hold onto his win.

Brie Hershey came on in traffic late to sneak into second with Tomecek ending up third.

Jacob Allen was fourth and Amy Ott rounded out the top five.

Williams Grove Speedway hosts the 6th annual Keystone Cup for 410 sprints on May 25 along with 305 sprints at fireworks at 7:30 pm.