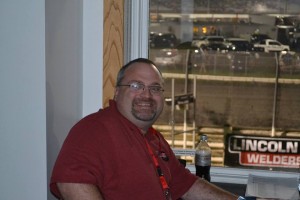 TJSlideways.com started quietly in the guest bedroom of parent’s house on a quiet evening in the spring of 1996.  T.J Buffenbarger has just completed the  spring semester at Lansing Community College and had some time on his hands.  Noticing a lack of racing information from his area he learned to code HTML by hand over a weekend and constructed TJ Slideways Michigan Sprint Car Page.  From those humble beginnings, TJSlideways.com from a local informant webpage to one of the largest open wheel racing sites in the world.

T.J. launched the first version of the website in July of 1996 with the help of Keith and Betty McCall with the Sprints on Dirt, I-96 Speedway, and Butler Motor Speedway the TJ Slideways Michigan Sprint Car Page was born.   With great photography from Mike Nelligan of MSPN photos the site immediately began to draw attention from not only people in Michigan, but users around the world.

One year later the domain name TJSlideways.com was purchased and coverage expanded to the entire Midwest.  In October 7th, 2007 the first live scoreboard updates were posted during a World of Outlaws sprint car show at I-96 Speedway.  The site continued updating events from I-96 live every Saturday night until 2000.  During this time T.J. developed “version 1.0” of the website with some homegrown  software to automate the entire website.  During this period TJSlideways.com expanded to cover open wheel racing all over the Midwest.  This eventually evolved into National and International coverage.

In August of 2000 after the Knoxville Nationals the college years were over and T.J. had a “real job” to go with the duties of running TJSlideways.com   Coverage expanded from the Midwest to the entire world.  At the same time the website migrated from its own software to a CMS system that was not developed in house so the focus could be more on content.   This same year live coverage of the Chili Bowl Nationals drew rave reviews and the site continued to grow.

Over the next decade TJSlideways.com covered some of the biggest races in Motorsports including the Knoxville Nationals, Chili Bowl, Kings Royal, Mopar Million, Indiana Sprintweek, Ohio Speedweek, and many others.  Going into the next decade TJSlideways.com went under another transformation.  With the success of a new radio show heard on RacesOnTheWeb.com along with various podcasts posted during the racing season.

The site is currently run as a family operation by T.J. and his father Bob and a handful of trusted photographers.  Often times T.J. and Bob will attend separate races and bring back their experiences to TJSlideways.com readers while other teams father and son will team up for an epic road trip.

We hope you enjoy your TJSlideways.com experience.  Any questions, comments, or concerns can be e-mailed to our staff via our contact form.