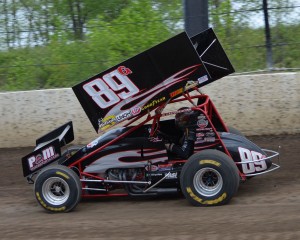 From DDR Motorsports PR
Watertown, CT — May 21, 2012 — Racers have to deal with fate and fortune every night they enter the track. One night fate takes away a great finish, and then a few nights later it turns bad fortune into good. This summarizes David Gravel’s runs with the World of Outlaws over the past week in New York, as he was running at the front at Rolling Wheels Raceway Park, but had to settle for a mid-pack finish. Then after a difficult night at Orange County Fair Speedway, the Connecticut native had luck fall his way when a flat tire early in the event led to a Top-Five finish.

Gravel began his night at Rolling Wheels on Wednesday, May 16, by qualifying in the fourth position. He finished sixth in the first eight-lap heat race to earn a spot in the dash, where he came home fourth to claim a starting position on the outside of the second row for the 25-lap A-Feature. The Connecticut native got a great start in the main event and using the high line claimed the second position. He stayed with race leader Paul McMahan up until the first yellow flag flew.

“We have really been clicking lately,” said Gravel. “At Rolling Wheels we drew a good number and rolled a good lap. I’ve always been pretty good in time trials, so when the car is right, we should be good in qualifying. Our engines have been solid and we have been consistent. Hopefully we can keep that up the whole year.”

On the restart, Gravel lined up on the low side of the track, but quickly got back to the top groove. The No. 89G was holding off charges from Chad Kemenah, while tracking down McMahan when it all went downhill for the young gun. With eight laps left, Gravel slowed and came to a stop after the throttle pedal broke, while running second. As a result, he had to settle for a 23rd-place finish.

“It was a tiny aluminum heim that connects to the throttle pedal that broke,” Gravel explained. “It’s pretty frustrating to have things like that happen. It always seems like those types of things happen when you are running well. At the end of the night, we can’t complain, because we were fast and right up there battling for the lead.”

On Saturday, May 19 at Orange County Fair Speedway, in Middletown, N.Y., luck was on Gravel’s side.  He started the night at the sprawling 5/8-mile by timing in 13th and transferred to the feature through his heat race. In the night’s main event, the No. 89G lined up in the 13th position and throughout the beginning of the race, Gravel ran just outside of the Top-10, dueling with veteran drivers Danny Lasoski and Donny Schatz, both former World of Outlaws champions.

The whole complexion of the race changed on Lap-21, when Gravel slowed with a flat tire. Thanks to quick work by crew chief Tyler Swank, he was able to rejoin the field. Six more caution flags followed, and after a number of contenders had lost tires on the hard clay track, Gravel worked his way up to the fifth position. At the end of the 25-lap contest, he had recorded his third Top-Five finish of the season with the World of Outlaws.

“It was a wild night for sure,” he stated. “With all the red flags, tempers were flaring. Three people didn’t blow tires and every else did. After we changed the tire and got back out, I was aggressive and able to pass some good cars, while a lot of the guys were just hoping to finish the race.”

Gravel has five Top-10 finishes in just 10 starts with the World of Outlaws this season, with three of those being Top-Five performances. He finished a season-best third with the series at Volusia Speedway Park in Florida back in February, while finishing fourth at Eldora Speedway in Ohio earlier this month, along with his fifth-place run at Orange County on Saturday night. The young driver, who competed full-time with the UNOH All Star Circuit of Champions, is currently third in that series point standings, on the strength of six Top-10 finishes.

Memorial Day weekend has long been known for racing, and Gravel will be in action on three consecutive nights. The 20-year-old will compete with the UNOH All Star Circuit of Champions on Saturday, May 26 and Sunday, May 27 at Fremont Speedway in Ohio, before making the trip to Lawrenceburg Speedway in Indiana on Memorial Day for a night race with the World of Outlaws.

Keep up with all the action:
Follow David Gravel on Twitter at www.twitter.com/DavidGravel89g and receive live updates from the track each and every race night. Results are also posted to the David Gravel Racing site on Facebook at https://www.facebook.com/pages/David-Gravel-Racing/143538695709198. Also visit, www.DavidGravel89.com for racing updates.