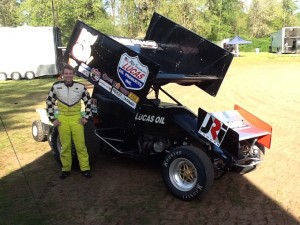 “We were fast all weekend, and on Saturday made a huge run from the back,”  Cox said.

Starting in the second row of his heat, Cox quickly grabbed the lead, and won the race, putting him in the dash, where he would score a second place finish to Kyle Miller.

On the ultra slick track, Cox got the jump on Miller, and set sail on the field, as he ran the top of the speedway.

With Crockett on the bottom, he seemed to find the rubber before Cox, and squirted past to take the lead.

Dropping down to the bottom, Cox would hang with Crockett, but Crocket was flawless over the final 10-laps and picked up the win.

“On Friday it was definitely better to be in second,” he said. “Roger Crockett was able to search around for the better line, and found the rubber, and beat me. He is the best there is at this place, and not to ashamed to run second to him.”

Back in action on Saturday night,  a high pill put Cox out late for time trials, and he ended up timing in 13th on the dead slick track.

Heat race action saw Cox get held up on the start, and ended up finishing in the fourth spot, and ultimately putting him 14th in the feature event.

The feature event saw Cox simply go where the other cars weren’t, as the track was in prime shape to charge forward on.

When the caution flew on the 12th lap, Cox had worked up to the top five as he was set on continuing his charge to the front.

On the restart, Cox jumped into the third spot and finally picked up the second on the 20th lap.

“The track was awesome, and it was fun to charge forward,” he said. “I really wanted to show people I could pass, and Harley gave me a great car. We are putting a 410ci in for this weekend and I’m really looking forward to that.”

ON TAP: Cox and the Van Dyke Motorsports team will be in action at the Silver Dollar Speedway for a pair of nights this weekend.