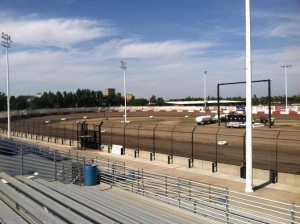 Tulare, CA — (September 16, 2013) — After being dark for much of the summer the Merle Stone Chevrolet Thunderbowl Raceway will return to action in a big way this Saturday evening September 21, with the powerful King of the West 410 Sprint Cars and the always exciting USAC West Coast Wingless 360 Sprints taking to the one-third mile clay oval.
The night of competition pays tribute to Harry Talbot, who was very instrumental at the Merle Stone Chevrolet Thunderbowl Raceway. Talbot was a right-hand-man to promoter Steve Faria and did everything he could to ensure things went smoothly at the Thunderbowl. He unfortunately passed away this year after an illness and we’ll be remembering him on Saturday at the “Harry Talbot Memorial.”
“We are really looking forward to Saturday night and paying honor to Harry Talbot,” said Thunderbowl Raceway’s Don Sharp. “It will be exciting as always with the King of the West 410’s and USAC West Coast 360’s on hand to give fans the best of both worlds. It’s also the final opportunity for drivers to get ready for Trophy Cup, so we invite everyone out to come have some fun with us at the Thunderbowl.”
Driving for Fresno based Roth Motorsports Kyle Hirst of Sacramento holds 42-point lead over Jonathan Allard in the King of the West 410 title chase and will be in search of victory at the Thunderbowl on September 21. The 25-year-old scored a pair of runner ups back in May with the series in Tulare and was also the winner last October of the 50-lap Trophy Cup final on Saturday night.
Hirst’s teammate Tim Kaeding will also be on hand this Saturday looking to get tuned up for the 20th annual “Trophy Cup” in October. The San Jose wheel-man is a three-time winner of the Trophy Cup and is always good for a show at the Thunderbowl Raceway. In March the two-time KWS champ beat the World of Outlaws during opening night of the double-header weekend and also captured last Saturday’s KWS Series event in Fernley, Nevada.
Two-time World of Outlaws champion and recent “Gold Cup Race of Champions” winner Jason Meyers will also invade the Thunderbowl on Saturday in the Tarlton & Son Inc. machine. The Clovis veteran captured last year’s “Trophy Cup” and in May swept the two-night King of the West Sprint Car Series weekend. Meyers has shown that he hasn’t skipped a beat despite running a limited schedule over the last couple seasons.
More top-10 drivers in the KWS standings expected on Saturday will include Chico’s Jonathan Allard, Sacramento’s Willie Croft, Fresno’s Craig Stidham, Grass Valley’s Jason Statler, Campbell’s Brent Kaeding, Grass Valley’s Carl Droivold, Oakhurst’s Doug Gandy and Fair Oak’s Chad Compton.
Local favorite “Hollywood” Danny Faria Jr. will lead the USAC West Coast 360 Sprint Car Series into the Thunderbowl Raceway on Saturday. The veteran driver is fresh off a victory at the most recent series event in Bakersfield and holds a 44-point lead in the standings going into this weekend, which features a double-header outing including an event at Kings Speedway in Hanford on Friday.
Three-time USAC Silver Crown Series champion Bud Kaeding ranks second in the USAC West Coast point standings and is coming off a runner up finish to Faria in Bakersfield. Completing the top-five in the standings are Richard Vander Weerd, Ryan Bernal and Markus Niemela. Rounding out the top-10 are Rusty Carlile, Jace Vander Weerd, Austin Ligget, Ricky Kirkbride & Landon Hurst.
Also on hand during the night will be the Vintage Super Modifieds.
Advance tickets for the “Harry Talbot Memorial” are also on sale and can be acquired by contacting the track ticket office at (559) 688-0909. Reserved grandstand seats cost just $20 with general admission bleacher tickets $18. KWS Winged 410’s & USAC Wingless 360’s will surely be a can’t miss night as drivers get geared up for the 20th annual “Trophy Cup” at the bad to the bone one-third mile clay oval!

The 20th annual Southwest Contractors Trophy Cup will take place on October 17, 18 & 19 at the Tulare Thunderbowl. The event is quickly gaining the reputation of being the premier Sprint Car showcase on the west coast and the 2013 version is sure to be another epic weekend of racing & fun. Tickets are on sale & can be acquired by contacting (559) 688-0909. More info at http://trophycup.org/

Returning to the Trophy Cup once again will be the “Taco Bravo Fiesta Night” on Friday and then the Saturday afternoon spaghetti feed, both located on the fairgrounds. The fiesta night will start 30 minutes after the races on Friday and the spaghetti feed will run from 12:30pm to 2:30pm on Saturday. As always the Trophy Cup benefits the Make-A-Wish Foundation like it has since the very beginning.

On Thursday night after the races there will also be a post-race party featuring hot dogs, chili dogs & a live band as well, so fans and teams are encouraged to stay after the races on both Thursday & Friday. “It’s been great to see how much the Trophy Cup has grown each season,” said Faria. “These extra additions are definitely turning this event into a happening and one that racers and fans won’t want to miss. I know we are excited and hope everyone else is too.”

The Merle Stone Chevrolet Thunderbowl Raceway is located at the Tulare County Fairgrounds on the corner of Bardsley and K Streets in Tulare, California. From the junction of SR 99 and SR 137, go west on SR 137. At South K go south one-half mile to the Fairgrounds. For more on the track log onto http://www.thunderbowlraceway.com/