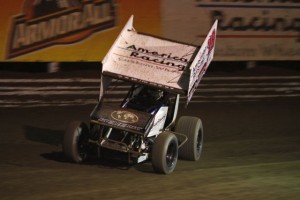 “It was a tale of two tracks over the weekend,” Madsen said. “Saturday night it was fast, tough, and grueling, and on Sunday night you were able to move around, and it was a fun weekend.”

With 28 cars on hand Saturday night, Madsen timed his Keneric Racing/American Racing entry in fourth fastest putting him in the first heat, where he scored a fifth place finish, and transferred to the feature.

On a demanding track, where passing was at a premium, Madsen focused on holding it to the floor and making clean laps, with no mistakes.

Though it wasn’t one of the most exciting nights of racing, the Knoxville, IA resident held strong, as he settled for a seventh place finish.

Back in action on Sunday night, Madsen and his team were greeted with a slick track early, as he timed his EarthEX/GWM Products entry in 16th fastest, but with the low car-count, he missed the three-heat inversion.

Charging from sixth to third in his heat, Madsen transferred to the feature, where he found himself in the eighth row.

With track conditions ideal for passing, ‘The Mad Man’ lived up to his name as he rode the Calistoga cushion, as he carved his way to the front of the field.

Sitting just outside the Top-10 when the caution flew with five to go, Madsen continued to run the cushion, as he clawed his way up to the sixth spot by way of his late pass on Paul McMahan, and he would hold the spot at the finish line.

“Sunday night we really had another awesome racecar,” Madsen explained. “Tyler, Chris, and Brandon really worked hard, and though we missed it a little in time trials, we went forward in our heat and the main. Huge thanks to everyone at Keneric and American Racing for making sure we have awesome equipment.”

ON TAP: Madsen and his Keneric Racing/American Racing team will be in action on Friday night at the Kings Speedway in Hanford, CA before heading south to the Perris Auto Speedway in Lake Perris, CA to close out their California tour.