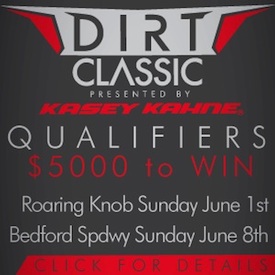 Catawba, N.C. —  (May 29, 2014) — There isn’t a tougher caliber of sprint car drivers in the country than in Central Pennsylvania.

Known as the PA Posse, the region has as much depth as it does talent. Throw in the invaders from neighboring states and a few premier names from across the country and the action will be thick during the Dirt Classic Presented by Kasey Kahne, which is a $20,000-to-win event on Saturday, Sept. 27, at Lincoln Speedway in Abbottstown, Pa.

“For us racers it’s huge,” Greg Hodnett said. “We don’t get the opportunity to race for that kind of money very often. It’s a big deal that Kasey Kahne and everybody involved is putting that kind of confidence in the racing here.”

The inaugural Dirt Classic will be preceded by a pair of qualifying races – this Sunday at Roaring Knob Motorsports Complex in Markleysburg, Pa., and Sunday, June 8, at Bedford Speedway in Bedford, Pa. Both qualifiers pay $5,000 to win and the winner is guaranteed a starting position in the Dirt Classic main event.

“They are good paying races and we like to support those races when they are available,” Hodnett said. “To have them as qualifying races are a bonus.”

The Roaring Knob Motorsports Complex qualifier will mark Hodnett’s first visit to the track. However, the Mike Heffner owned car he drives was victorious in the first-ever sprint car race at the facility last season.

“I heard it’s really picturesque,” Hodnett said. “We’re looking forward to getting out there.”

Joining Hodnett at the qualifiers and the Dirt Classic Presented by Kasey Kahne is fellow PA Posse native Danny Dietrich, who picked up a World of Outlaws STP Sprint Car Series victory at Lincoln Speedway in 2012 and 2013.

“I don’t know if running the track on a normal basis is going to help,” said Dietrich, who garnered the 2012 Lincoln Speedway track champion. “The biggest thing is in the beginning of the night you have to put yourself in the right position.”

While Dietrich and Hodnett are two of the favorites, Dietrich said to keep an eye on Stevie Smith, who claimed the World of Outlaws STP Sprint Car Series race at Lincoln Speedway earlier this month.

“The guy is fast,” Dietrich added. “He’s always good at time trails. He’s always been fast at Lincoln. I would say he’s going to be a major threat.”

First up are the pair of qualifying races with the opportunity to be locked into the Dirt Classic feature.

“We’re going to support Kasey and his efforts,” Dietrich said.

Gates will open for the qualifier at Roaring Knob Motorsports Complex at 3:30 p.m. with hot laps scheduled for 5:45 p.m. and qualifying at 6:15 p.m.

The qualifying race at Bedford Speedway is scheduled for front gates to open at 4 p.m. with hot laps at 6 p.m. and qualifying at 6:30 p.m.

Advanced tickets are on sale by clicking http://www.DirtClassic.com. Tickets will also be available on The Dirt Classic Facebook page, which will feature special giveaways throughout the year.

NASCAR star Kasey Kahne has enjoyed racing success in Central Pennsylvania as a fan, driver, car owner and promoter. With his roots in winged sprint car racing and a respect for the passion of the PA Posse faithful, Kahne has created The Dirt Classic Presented by Kasey Kahne. The first annual event will feature two $5,000-to-win qualifying races – Sunday, June 1, at Roaring Knob Motorsports Complex in Markleysburg, Pa., and Sunday, June 8, at Bedford Speedway in Bedford, Pa. – before the $20,000-to-win spectacle at Lincoln Speedway in Abbottstown, Pa., on Saturday, Sept. 27. For more information about the event, visit http://www.DirtClassic.com.

Located in Abbottstown, Pa., Lincoln Speedway is one of the most historic race tracks in the country. The 3/8-mile oval has been in operation for more than 60 years and features one of the most distinguished 410ci weekly programs. For more information about the track, visit http://www.LincolnSpeedway.com.