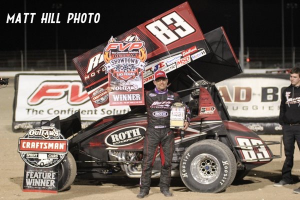 Joey Saldana and his Roth Motorsports team put together a great weekend of racing with the World of Outlaws Craftsman Sprint Car Series that saw Saldana score his first World of Outlaws win of the season at the Las Vegas Dirt Track on Thursday night .

“It was great to get that first win, and come right back and get a second place finish in Las Vegas,” said the Brownsburg, IN driver. “We were pretty good early in Arizona, but we just faded late in the race, so there is still work to be done for sure.”

Checking in at the Las Vegas Dirt Track on Thursday night, Saldana got his night off to a great start as he timed the Roth Enterprises/HR Livestock Transportation/Roth Investments No. 83 machine in third fastest in his qualifying flight.

Lining up on the front row of his heat race, Saldana had a strong car as he jumped into the lead and never looked back, picking up the win and earning a spot in the ever-important Dash.

Gridding the field from the sixth spot in the Dash, Saldana was able to gain a couple of rows for the feature event as he finished in the third spot, which lined him up on the inside of the second row for the 30-lap feature, an important spot based on track conditions.

When the green flag dropped, Saldana took advantage of the low side of the speedway as he moved into the second spot and chased after the early race leader. Patiently chasing after the top spot, Saldana would pull up on the leaders bumper in traffic, but the caution flag would waive and negate his progress.

As the green flag dropped, Saldana once again went to work on the race leader, Brian Brown, but would feel pressure in the name of Brad Sweet. On lap 19, Saldana would take advantage of a Brown miscue and take command of the race. Hitting the bottom beautifully, Saldana would not be denied on this night, as he picked up his first win of the season.

Friday night saw the “Greatest Show on Dirt” return to the Las Vegas Dirt Track, and ‘The Brownsburg Bullet” continued his Las Vegas heater as he set the standard in time trials, before racing his way to the win during heat race action.

Finding the Roth Motorsports entry in the third row of the Dash, Saldana was able to again work his way forward as a third place finish would put him in the second row of the A Main for the second consecutive night.

When the green flag dropped, Saldana was hard on the throttle and moved around Brad Sweet in turns one and two to jump into the lead and quickly set a torrid pace around the ½ mile speedway that featured two distinct racing grooves.

With Brad Sweet in his wake, Saldana would slip back to the second spot on the ninth lap, as Donny Schatz soon made it a three car battle for the spot.

Falling back to third at one point during the feature, Saldana would drive back around Sweet in thick traffic to reclaim the second spot, where he would go on to finish.

Leaving Las Vegas with two podium finishes, Saldana and company checked in at the Arizona Speedway on Sunday night for one final show before heading to California for an extended period.

After qualifying second fastest in qualifying time trials, Saldana would win his heat race, and run second in the Dash to find himself on the front row of the 30-lap A Main.

Using to cushion to his advantage at the start of the race, Saldana again rocketed out to the early lead as he was flanked by David Gravel and Shane Stewart.

Living on the cushion, for the first eight laps, Shane Stewart used the bottom of the track to overtake him for the lead, but Saldana would try to counter, and let third place running David Gravel close in on him.

As Saldana battled to stay in the second spot, Danny Lasoski would come into the picture and get by both cars to drop Saldana back to fourth.

Searching around the racy Arizona Speedway looking to get back to a podium position, Saldana would close his weekend out with a sixth place finish.

“We had a pretty good car every night, but Eric and I and still learning each other,” Saldana added. “I need to do a better job with my feedback to him, and I think that will help us be good at the end of nights. It is great to be up front in this car, and I have to thank Dennis and Teresa Roth for this opportunity to run with the World of Outlaws.”