– JEFFERSON, S.D. (May 9, 2017) – Jack Dover can breathe a little easier now that the first mark has been tallied in the victory column.

Dover captured his first win of the season last Saturday at Park Jefferson International Speedway, giving him a triumph during all 13 seasons he’s competed in a full-size sprint car. 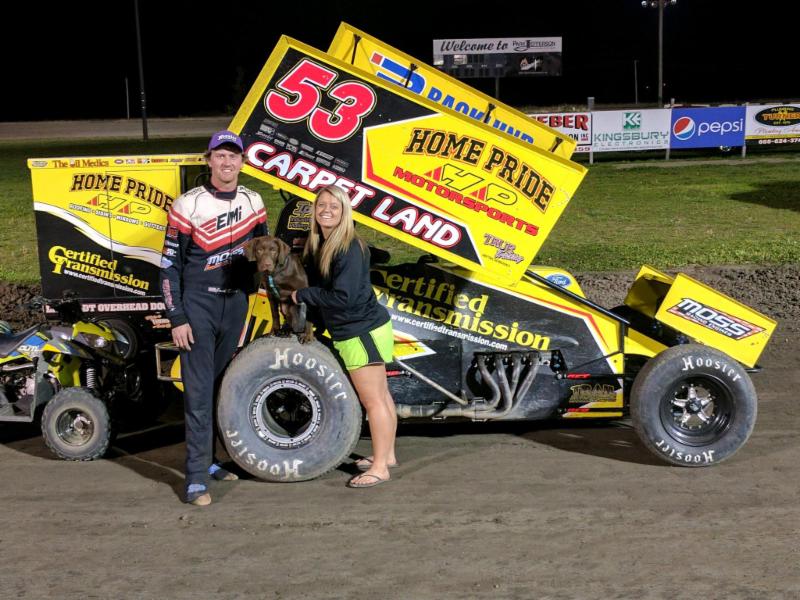 “It feels awesome,” he said. “Once you get that first one the next one is a little easier. We’re starting to figure some new stuff out as far as the setup and shocks so it’s going to get better. I’m really looking forward to the next few races.”

Dover opened last weekend on Friday at I-80 Speedway in Greenwood, Neb., where he kicked off the Carpet Land Nebraska 360 Sprints event by charging from fourth to win a heat race. That locked him into the feature redraw, in which he pulled the No. 3 to start the main event on the inside of the second row.

“We got up to second right away and rode around there,” he said. “About halfway through the race Thomas Kennedy and I battled it out for second place. With five laps to go the yellow came out and I was third. My car got way better after that yellow. We were able to get second. Ryan (Roberts) snuck away because there were two lapped cars between us, but it could have been close if he was right there. Our car was really good after that late caution.”

Dover finished second, which marked his first podium of the season.

The strong performance continued on Saturday at Park Jefferson International Speedway, where Dover maneuvered from fifth to claim a heat race win – his third straight. That advanced him into the feature redraw, in which he pulled the No. 3 for the second straight night.

“We rode around in second for probably 10 laps,” he said. “I waited for traffic to make my move on the leader. There was a car in the middle and one on the top. The leader went to the top and I went to the bottom and snuck my way through. We had a couple of yellows after that, but I had good restarts and we pulled away to win.”

He is scheduled to make his Lucas Oil ASCS National Tour season debut this Thursday at Lakeside Speedway in Kansas City, Kan.

True Trucking is a trucking company based in Gretna, Neb.

“True Trucking specializes in everything when it comes to hauling,” Dover said. “They can pretty much do it all. The True’s are family friends who have always been there to support me. I appreciate their partnership and look forward to reaching Victory Lane with them a lot.”