GREENWOOD, Neb. (May 31, 2017) – Jack Dover is used to winning races at I-80 Speedway so when he was presented with a new opportunity at one of his home tracks it wasn’t a surprise that the night ended with success.

Dover scored a victory last Saturday during his 305ci winged sprint car debut while driving for Chris Roseland at the high-banked track. 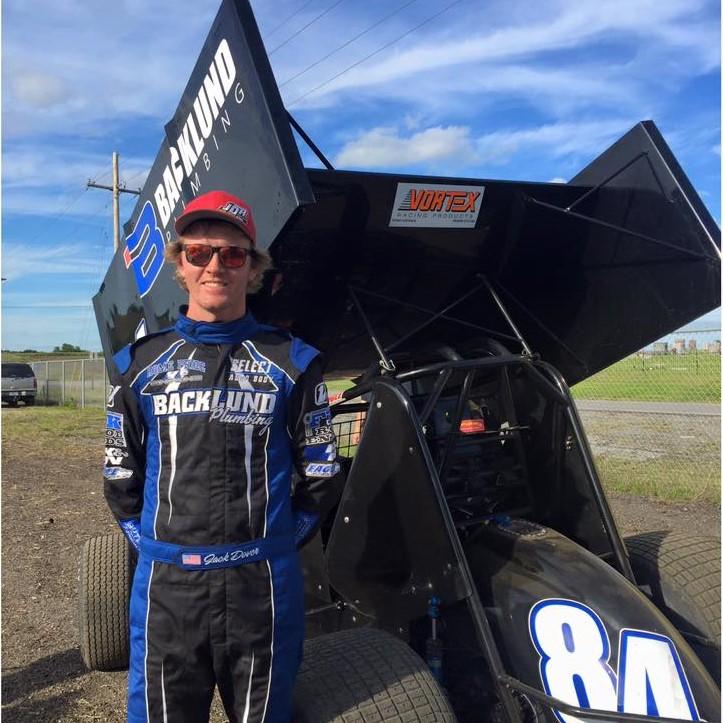 “We won a lot of races together last year so it feels good to not only get the first win of the season with Chris, but to win at a home track where I’ve won a lot of 360 races,” Dover said.

The Sprint Series of Nebraska event began with Dover charging from seventh to second place in a heat race. That earned him a spot in the feature redraw, in which he pulled the No. 1 to start the main event on the pole.

“Shayle Bade got the jump on the start and I ran second the first half of the race,” he said. “My car kept getting better and was phenomenal the second half of the race.”

Dover took the lead on Lap 11 of the 22-lap main event and he pulled away to win by more than five seconds.

Dover opened last weekend on Friday at Park Jefferson International Speedway in Jefferson, S.D., where he set quick time in his group during qualifying before ending sixth in a heat race. Dover started the main event on the outside of the front row, but was unable to finish the race in his bid for three straight wins at the track. He was credited with an 18 th-place result.

The team is scheduled to compete this Thursday through Saturday at Jackson Motorplex in Jackson, Minn., for the 39th annual AGCO Jackson Nationals.

“It’s a huge sprint car event for 410s, 360s and 305s,” he said. “There will be a lot of sprint cars there in every division so not only will it be fun to go race, it will also be a great event to watch when we’re not on the track. I’ve had a lot of success at that track so hopefully everything goes smooth and we can make it to Victory Lane one or two or three times this weekend.”

Thursday through Saturday at Jackson Motorplex in Jackson, Minn., for the 39th annual AGCO Jackson Nationals

Speedway Graphics/Action Signs is a full-service sign and graphic shop specializing in vehicle graphics and commercial signs. The company has been in business since 1986 and is centrally located in Omaha, Neb. For more information, visit https://www.facebook.com/Speedway-Graphics-408360385887505/ .

“Stan and everyone at Speedway Graphics have done a great job of producing great looking cars for me every year,” Dover said. “They always find a way to get it done even in the last minute and I appreciate their hard work and support of our race team.”