Dover christened the new track last Saturday by claiming the Carpetland Nebraska 360 Sprints event. It was his first win of the season with the series, which gives him the lead in the championship standings. 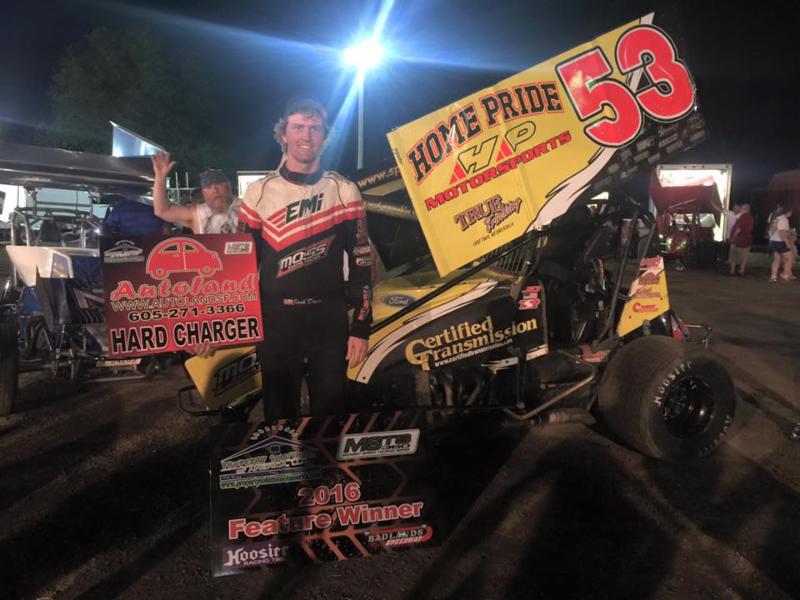 “For being a new track it was rough, but they were trying to make it better,” he said. “They went out and graded it three times. That’s a good start to a new track.”

Dover opened the night by advancing from third to second place in a heat race. That locked him into the feature redraw, where he pulled the No. 6 to start the main event on the outside of the third row.
“We got to third place pretty quick,” he said. “We rode there for about 10 laps. I passed for second around Lap 14 and a couple of laps later I took the lead. For being on a rough track our car was pretty good.”

Dover also garnered the Hard Charger Award for passing the most cars, which earned him a $100 bonus.

Last weekend began on Friday at Salina Speedway in Salina, Kan., with the NCRA. Dover placed second in a heat race, which lined him up on the inside of the second row for the main event.

“We broke a rocker in the motor during the pace laps,” he said. “There were two red flags right away so we got it switched, but we were in such a hurry that we didn’t back the motor off. When they went to push us off it wouldn’t fire because it was full of fuel and hydro-locked.”

Dover was unable to start the main event and he was credited with a 13th-place result.

He is scheduled to return to action this Saturday at Park Jefferson International Speedway in Jefferson, S.D., with the Carpetland Nebraska 360 Sprints and Sunday at Badlands Motor Speedway in Brandon, S.D.

Saturday at Park Jefferson International Speedway in Jefferson, S.D., with the Carpetland Nebraska 360 Sprints and Sunday at Badlands Motor Speedway in Brandon, S.D.