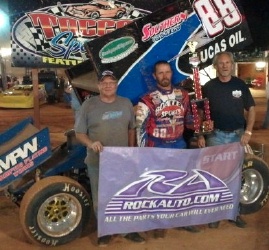 K&N Filters Pole Position starter Brad Bowden from Hernando, Mississippi grabbed the lead on the initial start and led the initial seventeen laps before Crawley made the pass for the lead. Two laps later as Bowden was trying to re-take the point in lapped traffic, he tangled with a lapped car and had to re-start at the rear of the field. On the re-start with eleven laps to go, Crawley held the point and went the final distance for the win. Ernie Ainsworth, Johnny Gardner, eleventh starting Derek Hagar from Marion Arkansas in fourth place and 2011 USCS presented by Goodyear Rookie of the Year, Jordon Mallett from Greenbrier, Arkansas rounded out the top five drivers.

The next United Sprint Car Series presented by Goodyear Outlaw Thunder Tour Speedweek 2012 Round #2 event is at Greenville  Speedway on Sunday, May 27th  @7:30pm.  The series then stops at Clayhill Motorsports in Atwood, Tennessee for Round #3 on Monday night (5/28). After two days off the mini-series picks up again at Clarksville Speedway in Clarksville, Tennessee with Round #4 on Thursday night, May 31st before contesting Rounds #5 and #6 at Columbus Speedway in Columbus, Mississippi on Friday and Saturday, June 1st and 2nd. For a complete USCS schedule and rules, etc., please visit www.uscsracing.com or call 770-460-7223.