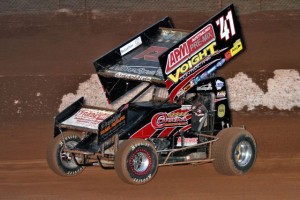 After a 12-month absence, the Chariots of Thunder Series for 410 Sprintcars is set to return to Northline Speedway in Darwin, Northern Territory later this month.

With a prize pool of over $20,000 on offer over the two weekends of racing, the Chariots of Thunder Series has received close to 20 nominations. Both of the Saturday night feature races will be pay $4,000 to the winner.

Amongst the nomination list is a strong contingent of interstate competitors: Cameron Gessner (WA), Trent Pigdon (WA), Glen Sutherland (SA) and Luke Robinson (WA). After a solid 2012-13 season that included the AHG Series win and a top-10 finish in the Grand Annual Classic, Gessner is primed to begin the 2013-14 season with a winning results at the Chariots of Thunder Series. Not to taken lightly, Pigdon, Sutherland and Robinson are also looking for solid performances.

The form local driver so far in the 2013 season at Northline Speedway has without doubt been Ben Atkinson. The newly crowned Northern Territory 410 Sprintcar Champion, who’s the current and two-time Sydney Speedway 410 Sprintcar Track Champion in New South Wales, heads into the Chariots of Thunder Series as the favourite. Other locals who are aiming to be amongst the leading contenders include Daniel and Jarrod Goldoni, Jamie O’Neill, Jamie McInnes, Troy David, Damien Thorne, and Glen Higgins.

When the Chariots of Thunder Series was last staged for the 410 Sprintcars, back in 2011, it was dominated in impressive fashion by Western Australian Ryan Farrell.