Concord, CA — (August 16, 2013) — Damion Gardner’s resume is swarming with main event wins and titles including the 2005 USAC/CRA championship and two Oval Nationals victories.  Tonight, as he drives from the Bonneville Salt Flats to Southern California for Saturday’s USAC/CRA race at Perris Auto Speedway, he can bask in the glory of a brand new addition to that resume.  Gardner is “The World’s Fastest Sprint Car Driver.” 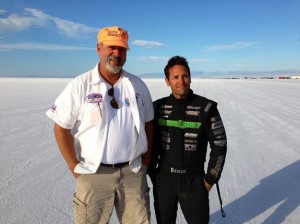 The week at Bonneville was satisfying and exasperating at the same time.  Gardner is delighted with his new label and with the knowledge that his Go Rhino! “Green Demon” car can be referred to as “The World’s Fastest Sprint Car.”  However, there is some frustration that they came so close to 200 MPH with a fast pass at 194.27.  Gardner’s final attempt on Friday morning ended with a spin on the slippery salt surface.

Damion Gardner and SCTA Technical Chairman Lee Kennedy after his last pass in “The World’s Fastest Sprint Car” on Friday.  Media, please feel free to use this and the photo below and please give photo credit to “Surfnsprint.”

“Two-hundred was a nice round number,” Gardner said as he passed by Las Vegas on the way to Perris.  “That is what we went there shooting for, but we didn’t get it.  It leaves something for us to shoot for, for next year.  We definitely learned a lot this week.”

He looks forwards to getting a full year to get the car ready this time.

“We really did not get started (putting the car together) until, I don’t know, maybe two months ago,” he said.  “It was a lot of work in a short amount of time.  It was definitely full steam ahead working on it.” 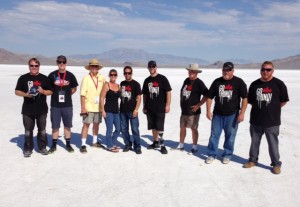 The wiry driver continued about the time and sacrifices.

Damion Gardner is in the center of the above photo with the crew of the Go Rhino! “Green Demon.”

It was an electrifying week and a new adventure watching Gardner and the Go Rhino! “Green Demon.”  If you thought this effort was a good one, wait until 2014.  As Mike Grosswendt said on Friday, “We have only begun to fight. We are already plotting our revenge.”

To see a Loudpedal Productions video on “The World’s Fastest Sprint Car,” at Bonneville please click on or paste the following link into your browser:  http://www.youtube.com/watch?v=omkB-79eW3o&feature=c4-overview&list=UUuaxfAugSI-ByjFsyLD0K6g

Go Rhino! is a valued partner in this exciting project.  For more details on the company and the quality products Go Rhino! produces, please visit the company website at: http://www.gorhino.com/

To hear Gardner’s interview about driving the “World’s Fastest Sprint Car” with Shawn Wood on the Dirt Track Channel, please click on the following link: http://thedirttrackchannel.com/Webcast.html

Watch this space for more follow ups on this effort and for all of the fun and excitement getting ready for 2014.  You can also check out what it going on in Utah on Instagram and Facebook.  On Instagram (http://instagram.com/) simply type in name “surfnsprint” to view photos of the epic endeavor.  On Facebook, you can check out the Damion Gardner Fan Page, Steve Watt or Loudpedal Productions for their take on what is happening with the ground breaking effort.

Fans can listen live to the high speed action on the Salt Flats at the following link: http://www.scta-bni.org/Bonneville/SpeedWeek%202013/LiveStream.html

Don’t forget the great new website, http://worldsfastestsprintcar.com/, for copious amounts of photos, news and facts on the driver, the car, the team and the goals.

Gardner’s endeavor will be documented in a made for TV documentary titled “The World’s Fastest Sprint Car.”