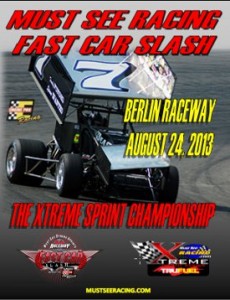 Holly, MI — (August 19, 2013) —  California star JoJo Helberg and Indiana’s Brian Gerster carry the points lead to the championship event of the Xtreme Sprint Series 2013 campaign this weekend, with three otherdrivers nipping at their heels in the title hunt. The TruFuel Must See Racing Xtreme Sprint Series will travel to the historic Berlin Raceway in Marne, Michigan this Saturday, August 24th.

Helberg of Rohnert Park, California leads the duo into the championship event with hopes to repeat last year’s Berlin victory and 2012 MSRXSS championship. Gerster will have his last chance to capture the 2013 points lead and series championship. Helberg bolstered his title hopes with this past Saturday’s win at Anderson Speedway leaving the two split by a narrow 12 points at the end of the night. The next day on Sunday August 18th Gerster closed the points and championship battle down to a mere two (2) points with his victory on the high banks at the Winchester Speedway “King Of The Wings” event.
2011 Series Champion Troy DeCaire of Tampa, Florida rides third in the standings with 2013 Pay Less Little 500 winner Jacob Wilson  in fourth  place and Aaron Pierce of Daleville, Indiana  chasing the championship from the fifth spot.
With 49 different drivers from across the country competing it has been a season of intense competition for the MSR Xtreme sprint cars. This year MSR has had six different winners out of nine events. Brian Gerster has recorded two feature wins with JoJo Helberg in victory lane at three events. Aaron Pierce, Brian Olson, Canada’s Ryan Litt and Jacob Wilson have also visited the 2013 MSR winners circle.
The nights fastest eight qualifiers will line up fully inverted in the special eight lap Engine Pro “Fast Car Slash” with the finishing order determining the feature event front starting spots.
The Engine Pro “Fast Car Slash” opens with the first round of practice at 2:30 p.m. on Saturday, followed by a full program of time trials and heat races capped by a 30-lap showdown on the sweeping paved oval. At night’s end the 2013 MSRXSS champion will be crowned.
The event will be broadcast on national television on a variety of cable networks, including MAVTV and DIRECTV entertaining race fans across America.  MSRXSS cars are officially the “World’s Fastest Short Track Cars,” drawing fans and viewership from across the country to see the cars racing at record setting speeds on some of the most prestigious tracks in America.
More information is available at www.mustseeracing.com.