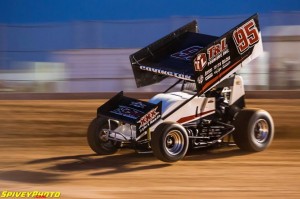 Though he came up a little short on his fourth win of the season on Saturday night at the Kennedale Speedway Park, Matt Covington captured his second consecutive ASCS Sooner Region Championship by way of his third place finish in the region’s final race.

“We had a great car on Saturday night, and it was nice to win one championship,” he said. “It was a great point battle all year, and we are all very happy to come out on top.”

Lining up on the front row of his heat race, the Glenpool, OK driver got a great jump, and won the race going away, putting his T&L Foundry/Bob Hurley RV/Triple X backed machine in the evening’s redraw.

Pulling the eight pill, Covington lined his Winters/Brodix/C.G. Martin Company backed No. 95 machine up in the fourth row of the main, but quickly showed he had a strong racecar.

When the race went green, Covington worked through traffic, as he picked cars off at will, and found himself in the second spot as he chased after Kevin Ramey.

With just a handful of laps to go, Covington felt pressure from third running Johnny Herrera, and with three to go, Covington ultimately lost the second spot, but held on for a third place finish, giving him the series championship.

“I think we had a second place car, for sure,” he added. “With the points deal being so close, I didn’t want to do anything stupid late, and didn’t force the issue with Herrera, It was a great battle with Mike Goodman, and I want to congratulate his boys for the year they had.”

ON TAP: Covington will be in action at the Texas Motor Speedway on Saturday night as he looks to inch closer to the LoneStar Region Championship.