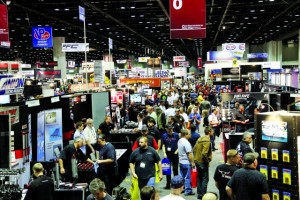 This year’s PRI Show, which features exhibits by over 1100 hardcore racing companies occupying 3300 booths, will bring more than 40,000 motorsports professionals from all 50 states and 72 countries to Indy for ‘The Three Biggest Business Days in Racing.’

Showcasing more than 1100 exhibiting companies while drawing 40,000-plus motorsports professionals from around the globe, the Performance Racing Industry Trade Show will be better than ever when it returns to the Racing Capital of the World in 2013.

Known as “The Annual Epicenter of New Racing Technology,” this year’s PRI Trade Show takes place December 12-14 at the recently renovated Indiana Convention Center in Indianapolis. Over 3300 booths displaying the latest products and services in hardcore racing have been plotted on the Convention Center’s expansive show floor.

Motorsports entrepreneurs, racing teams and more are invited to this trade-only event in which all forms of racing are represented, including stock car, sprint car, dirt late model, open wheel, drag racing, off-road, karting and more.

“This extraordinary array of exhibitors, that hasn’t been experienced in years all in one place all at one time, is the most powerful magnet for buyer attendance that the PRI Trade Show can have,” said PRI Trade Show Producer John Kilroy. “It’s going to be an incredible showcase of the latest advances in racing technology—a ‘must attend’ event for racing professionals everywhere.”

And, on the morning of December 12, the great heritage of the PRI Trade Show’s Grand Opening Breakfast continues with the special appearance of one of racing’s greatest champions, Richard Petty.

Known to many simply as “The King,” Petty is the most decorated driver in the history of NASCAR racing, winning a record 200 career races and seven NASCAR Cup championships during his illustrious career behind the wheel.

“We’re honored to have Richard Petty make his first-ever appearance at the PRI Trade Show’s Grand Opening Breakfast,” added Kilroy. “Everybody in the business of auto racing owes a lot to Richard, and the Petty family, for all they’ve done to establish NASCAR racing as one of America’s most popular sports.”

Admission to the PRI Show is complimentary, but all attendees must prove they own, manage or are employed by a racing business.

In addition to a three-day array of exhibits, over 45 conferences, seminars and special networking opportunities have been planned for Race Industry Week, which begins December 9. Encompassing the days leading up to and including the annual PRI Trade Show, Race Industry Week 2013 plays host to a number of co-locating events and activities, including the Advanced Engineering Technology Conference (AETC), the International Council of Motorsport Sciences (ICMS) Annual Congress, the Race Track Business Conference, and the Vehicle Dynamics & Data Acquisition Seminar.

Indeed, the hottest new racing products, the latest advances in motorsports engineering, and the best of today’s precision automotive machining equipment will be on display at PRI, which comes back to Indianapolis following a historic eight-year run in Orlando, Florida. PRI had previously taken place in Indianapolis from 1998-2004.

The PRI Show’s return to the Circle City was set into motion in late 2012, when the Specialty Equipment Market Association (SEMA), which owns PRI, purchased the International Motorsports Industry Show (IMIS), the racing trade show that was held annually in Indianapolis since 2009.

The IMIS has since been consolidated with the PRI Show, unifying the racing industry’s two trade shows into one and creating the opportunity for exhibitors and buyers to do business in a single location.

“We are excited to bring the PRI Trade Show back to Indianapolis, where exhibitors and buyers experienced six very successful racing industry trade shows, from 1998 to 2004,” said John Kilroy, producer of the PRI Trade Show. “Chris Paulsen, Jeff Stoops, Tony Stewart and the entire IMIS team have done an excellent job starting up a new racing trade show, and we promise to build on their mission to keep Indianapolis the annual epicenter of new racing technology.”