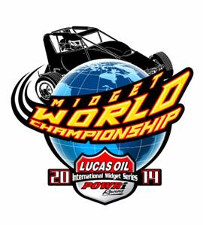 Michael Pickens won the feature in the third round of the POWRi Lucas Oil Midget World Championship at WXC Speedway at Western Springs, New Zealand, on Saturday (Jan. 4) before a crowd of 14,500.

“That crowd was just awesome, man,” Pickens said. “This is the only place in the world that you can come to race and have thousands of people on their feet cheering, and I mean that. People probably don’t realize how wicked this place is, but it’s truly magic.”

The four-time New Zealand Midget National Champion  started on pole and fought off a fierce challenge by Rico Abreu of Rutherford, Calif., in the early stages of the race before Abreu dropped a cylinder in his engine.

The next group of Americans to make it difficult for the Kiwi was Christopher Bell of Norman, Okla., Darren Hagen of Riverside, Calif., and Bryan Clauson of Noblesville, Ind.

But with 12 laps remaining, the three U.S. drivers were involved in a tangle that also took out hard-charging New Zealand veteran Brad Mosen, who had passed 18 cars and was showing promise to challenge for the lead.

Pickens had the speed and led to the checkered flag. Clauson restarted Clauson finished second and Brock Mascovich of New Zealand was third.

“Those Americans had their noses in front a few times but I was getting out wide on those restarts, which seemed to be helping,”  Pickens said. “Those guys are the best in the world, so it’s special to beat them.”

The next round of the inaugural POWRi Lucas Oil Midget World Championship will be run Jan. 25 at Brisbane International Speedway.