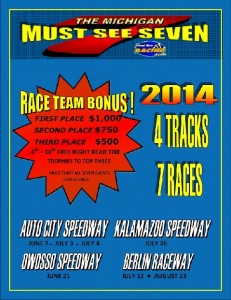 Anderson, IN — (January 28, 2014) — Must See Racing officials announced today the 2014 MICHIGAN MUST SEE SEVEN mini-series with trophies and cash awards for the MSRXSS teams that compete in all seven 2014 State of Michigan events.  Standard points awarded will determine the mini-series finishing order. Three events at Auto City Speedway, two at Berlin Raceway and one each at Kalamazoo Speedway and Owosso Speedway will play host to the new MICHIGAN MUST SEE SEVEN.