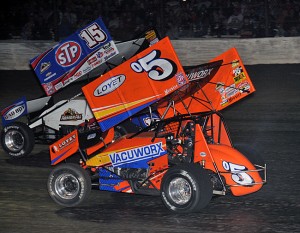 April 30, 2014 – Brad Loyet and the Vacuworx Global/Miller Truck Lines #o5 team have shown speed and learned valuable lessons the past two weekends racing with the World of Outlaws.  Though some tough luck plagued them last weekend, they are looking forward to carrying some momentum into this weekend’s Lucas Oil ASCS Series events Friday at Outlaw Motor Speedway in Muskogee, Oklahoma and the “Rock ‘N Roll 50” at Riverside International Speedway in West Memphis, Arkansas Saturday.

Things started for Brad with the Outlaws at the High Banks in Salina, Oklahoma on Friday.  Unfortunately, it was a rough start resulting in no qualifying time.  “We had put a new rear-end in the car for the weekend,” Brad explains.  “We thought the ring gear had been getting a little worn from the 410 abuse.  We put a brand new rear-end in with no laps on it, and something internally was broken.  I would get to 700 rpm’s and it would jump out of gear on me.  We thrashed to get it changed and didn’t get a time in.”

After running sixth in the B and transferring to the feature, Brad started on the tail.  “We had a pretty solid racecar for the track conditions,” he says.  “We chose to put a hard right rear tire on it.  It ended up working out.  I was probably abusing the tires a little too hard.  We were probably up to about twelfth from dead last, and on the last lap, we blew a right rear tire.  It was one of those deals where you know that’s how the night was supposed to end with the way it started.”

It was an unfortunate end with the team’s Oklahoma-based partners in attendance.  “We had folks from Vacuworx and Miller Truck Lines both there,” says Brad.  “Luckily enough, they see us busting our butts and doing our best.  That’s just part of it.  We’ll see them again this weekend at Muskogee.”

Saturday’s Outlaws event was just ten minutes from the race shop, I-55 Raceway in Pevely, Missouri.  “In qualifying, I just didn’t stay up on the track enough, and the car got away from me,” says Brad, who timed in 27th.  “We didn’t have quite the right setup.  It’s a deal where I tell myself I need to run the same setup, until after qualifying I question why I’m doing it again.  I’ve determined not to put that setup in the car again.”

Starting at the back of his heat, the Sunset Hills, Missouri driver didn’t even make a full lap.  “We were good for the half of a lap we got in,” he says.  “Unfortunately, a guy spun out in front of us.  We were in the wrong place in the wrong time and got upside down.”

The team went into action to prepare the car for the B main.  “The guys had the stuff ready for the car when I got back to the pits,” says Brad.  “We had about ten minutes to get ready for the B, and we got it slapped together.  We were able to transfer out of that (9th to 6th).”

Starting 24th in the feature, Brad felt good in the car.  “Our finish was really hurt by the way the Outlaws score,” he says.  “They claimed (leader Brad) Sweet had lapped me before he turned over and caused a red.  The top five cars had crossed the line, so they counted the lap.  So I was a lapped car the rest of the race even though the leader was out at that point.”

The car was definitely one of the fastest on the track.  “I was racing through the pack, but every time a yellow came out, I had to go to the back behind the lead lap cars again,” says Brad.  “That would put me back in 17th or 18th, and it got really old.  It was one of those deals where we were caught behind the 8-ball in the heat, and it cost us track position.”

Brad is excited for this weekend’s events with the ASCS.  “We’re learning so much running the 410,” he says.  “I’m really looking forward to running the 360 stuff this weekend.  I think this is really going to step up our program.  We’ve won a race at Muskogee in a midget, but this will be our first time in a sprint car.  Two years ago we led and finished second at ‘The Ditch’, so I’m really looking forward to the weekend.”