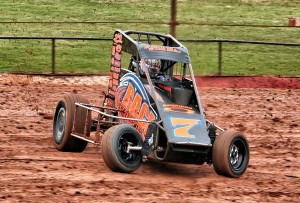 Sydney, AU — (April 5, 2015) — This Saturday night at Valvoline Raceway sees the curtain come down on the 10th anniversary running of the “Speedcar Super Series” as the points battle between Sydney’s Nathan Smee and Newcastle’s Adam Clarke intensifies.

Chipping Norton throttle stomper Nathan Smee has a narrow lead coming into the final round but the bad news for his rivals is that he absolutely screamed away from the field to win the previous round at Archerfield Speedway in Queensland two weekends ago.

Back-to-back Australian Champion Adam Clarke finished fourth at Archerfield after issues with his racecar prevented a more ‘Clarke-like’ charge through the field.

Clarke did however put in a commanding performance to win the Australian Championship at Warrnambool in Victoria as he handsomely showed Smee the way home.

As the duo take the ongoing rivalry to their home track Valvoline Raceway (Parramatta) this Saturday night the gloves will well and truly be off as “the Hunter Valley Hurricane” Clarke tries to mow down Smee’s skinny 337 point margin.

And he can win.

“Nathan and Adam have really been in a class of their own over the last few weeks,” says SSS organizer and Speedcar aficionado Ken Jenkins, “when you see Nathan at Parramatta he’s often so dominant that you really wonder who can stop him. But then you have Adam (Clarke) here, plus Newcastle’s Matt Smith and a host of other Sydney, Queensland and Newcastle stars and you realize that can anything can happen on the night.”

Queensland duo Brett Thomas (who is also the defending champion of the Speedcar Super Series) and 17-year-old star of the future Rusty Whittaker will head down south for the big finale.

They’ll be in for a hostile reception however from the fleet of Sydney and Newcastle stars including Parramatta specialist and third place in the series Troy Jenkins and his younger brother Darren.

The format for racing on the night includes qualifying (time trials) two-heat races per driver, a Pole Shuffle for the top 8 in points, a B-Main and the Championship deciding A-Main.

Kids 12 and under FREE

For more information visit www.valvolineraceway.com.au or visit us on Facebook.