Dover won his third straight 305ci race for Chris Roseland last Sunday to give him eight total wins in his last 16 races, including six wins in July. 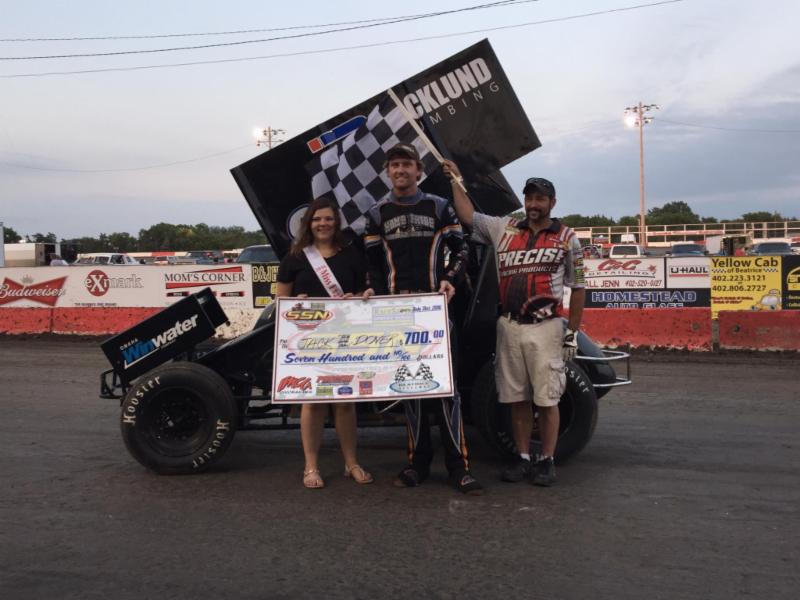 “It feels good because we struggled so much at the beginning of the year,” Dover said.

Last weekend’s win capped a tripleheader that began on Thursday with the Lucas Oil ASCS National Tour at Park Jefferson International Speedway in Jefferson, S.D. Dover finished fourth in his heat race before advancing from 10th to seventh in the main event.

“From the beginning of the night to the end we were running on the infield,” he said. “Half the feature we had our left rear tire on the infield. The track was that dry and slick.”

Dover then ventured to Knoxville Raceway in Knoxville, Iowa, on Saturday. He qualified seventh quickest and advanced from third to second place in a heat race before scoring an eighth-place finish in the feature.

“For being the first time there this year we had a consistent car,” he said. “We’re on a good starting point. We tried some different gear and fueling stuff. We think we know what we can do to make it better.”

The weekend concluded on Sunday at Beatrice Speedway, where Dover powered Roseland’s race car from fifth to third place in a heat race. That lined the team up on the inside of the sixth row for the 25-lap main event.

“We were running in eighth and a yellow came out five laps in,” he said. “I happened to look in the infield and there was a guy pointing to every driver telling him to go to the top. I knew who it was. He races modifieds at that track. I took his advance and sure enough we passed cars. We got the lead with eight laps to go.”

While that gives Dover three straight wins with Roseland, the more impressive statistic is how many cars Dover has passed to do so.

“The first race we won in it we came from 16th and then fifth to win and now 11th,” he said. “It feels great to have this success.”

“Luke Cochran has become a family friend the last few years and he’s been instrumental in keeping our program going,” Dover said. “He also has a great company, which we’ve seen firsthand when Home Pride Companies, Inc., roofed my parent’s house.”