EAGLE, Neb. (June 14, 2017) – Jack Dover wrapped up a busy week by earning his sixth victory of the season on Tuesday during the Sprint Series of Nebraska main event at Eagle Raceway.

Dover was driving for Chris Roseland in his third different race car of the week with the series, which served as the support class during the World of Outlaws Craftsman Sprint Car Series Eagle Nationals. 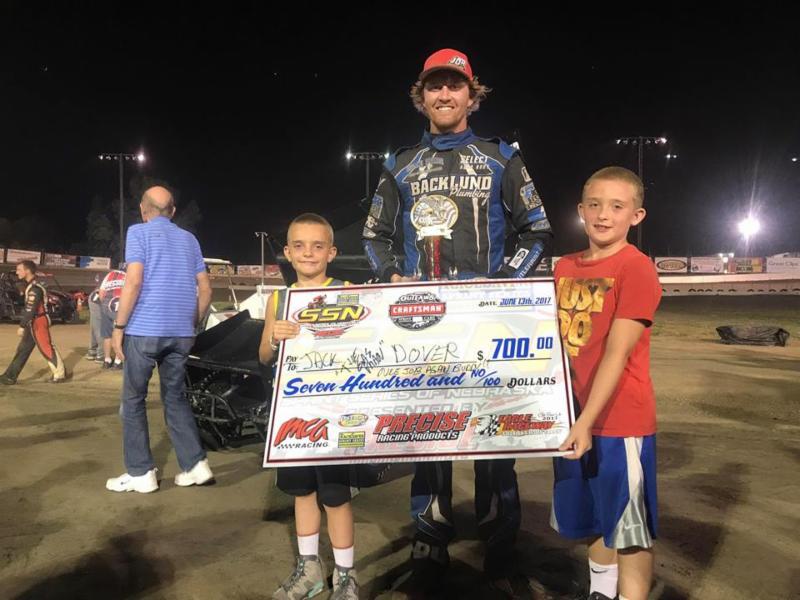 “Our draw was awesome,” he said. “We drew the No. 3 to start the night and that put us on the pole of the second heat race.”

Dover won the heat race to lock into the feature redraw. He then pulled the No. 4 to start the 25-lap main event on the outside of the second row.

“We got up to third to start and to second about eight laps in,” he said. “We followed the leader for a while. I moved down a lane in turns one and two. I was running in the middle where the rough spots were. It had a lot of moisture because no one had been running there.”

Dover took the lead with approximately 10 laps remaining and he pulled away to win by nearly five seconds. It was his sixth win in the last 11 races and his second with Roseland this season.

“I drove for him once two years ago,” Dover said. “He rebuilt his race car and made it like my car. We went out and won the heat race to get an extra $500.”

Dover’s heat race win locked him into the feature redraw. He pulled the No. 5 to start the main event fifth.

“I was up to second at one point, but got into it with someone and knocked the nose wing down,” he said. “I think we were a second-place car if not a winner if not for that, but we held on for a top five.”

He then hopped in his own sprint car on Saturday at Junction Motor Speedway in McCool Junction, Neb., with the Carpet Land Nebraska 360 Sprints. Dover advanced from third to second place in a heat race to make the feature redraw. This time he pulled the highest number – eight – to start the feature on the outside of the fourth row.

“We got into an accident on the first corner and crushed the header,” he said. “The leader went into turns one and two and got too loose and spun out. I almost had it saved, but someone else came in and hit my car. We restarted, but I wasn’t making any progress so we pulled off.”

Dover was credited with a 16th-place finish.

He will pilot his sprint car this Friday at Jackson Motorplex in Jackson, Minn., and Saturday at Off Road Raceway in Norfolk, Neb., with the Carpet Land Nebraska 360 Sprints before driving for Roseland on Sunday at Raceway Park in Jefferson, S.D., with the Sprint Series of Nebraska.

Friday at Jackson Motorplex in Jackson, Minn., and Saturday at Off Road Raceway in Norfolk, Neb., with the Carpet Land Nebraska 360 Sprints and Sunday at Raceway Park in Jefferson, S.D., with the Sprint Series of Nebraska