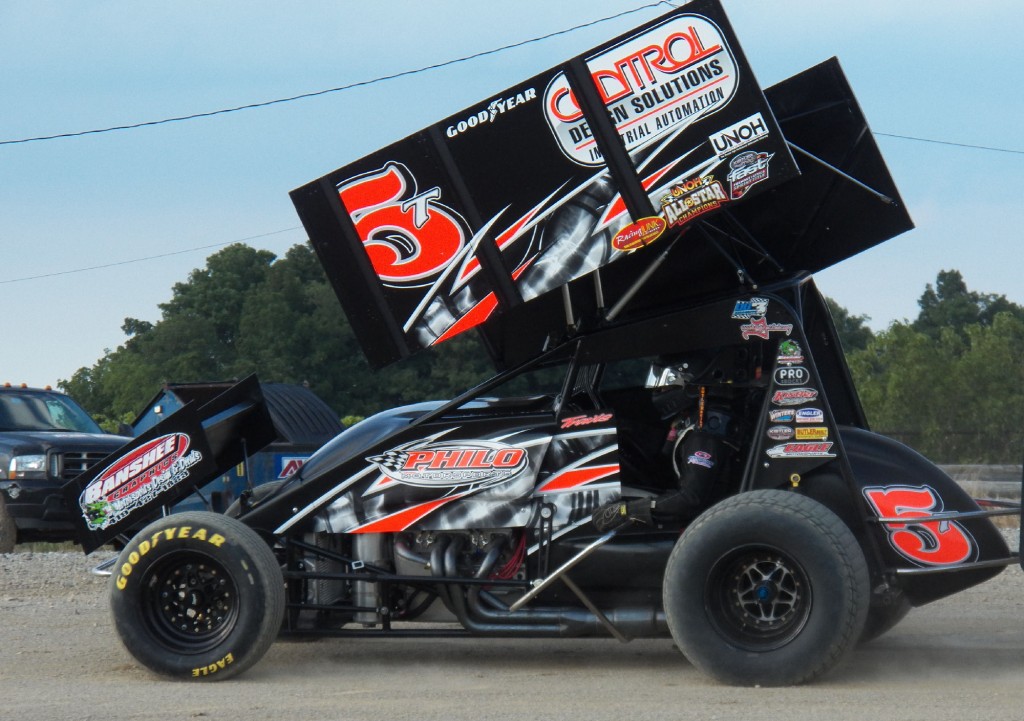 Waterville, Ohio’s Travis Philo was there to take advantage when leader Brandon Martin’s left rear tire exploded with nine laps to go in the O’Reilly Auto Parts 410 Sprint feature. Philo, 21, then held off a challenge from veteran Greg Wilson with a restart with just three laps to go, to score his first ever 410 sprint car victory. After climbing from his Control Design Solutions/Banshee Graphics/DB3 Imaging.com backed machine in the Engine Pro Victory Lane, Philo grabbed his dad in a huge bear hug.

“I have to thank my Dad. He has stood behind me and has spent a lot of money on me since I started racing when I was four years old. I want to thank Gary Bowe…he’s been working on this thing for two years. And tonight Brian Kemenah came to help us as well…hope he sticks around for awhile,” said Philo. “I want to thank my uncle and everyone who has stayed behind us through the rough times.”

In the Summit Racing Equipment UMP Late Models, Holland, Ohio’s Ky Harper, also 21 years of age, traded slide jobs with Mike Bores after a restart with just six laps to go, and went on to score his first ever feature win.

“After Travis won, I kind of joked how great it would be if I got my first win too. Travis and I are friends so I figured if he could do it I could too,” said Harper beside his Fred Wolf Auctioneer, IAM Machinists, Angola Plaza, Stiltner Racing backed #34.

“I have to thank all these guys who bust their butts every week on this thing and especially tonight as hot as it was. This one is for a buddy of mine who we just lost,” added an emotional Harper.

It looked like it was going to be three first time winners in a row, as 15-year-old Jordan Ryan led the first 23 laps of the 25-lap Fremont Fence 305 Sprint feature. But, a caution with just two laps to go, put Caleb Griffith right on Ryan’s rear bumper, and Griffith pounced on the restart, executing a slide job in turns three and four to take the lead as they raced to the white flag. Griffith would pull away the final lap for his second win of the season and fourth career victory at Attica.

“Jordan did an awesome job on those restarts…I honestly didn’t know if we had anything for him. I got a good run on him in one and two on that restart and was able to keep up my momentum. I nearly gave that away though when I ran off of turn two there late in the race. But as I always tell the guys, we are too smart to quit. They have given me a great car all year…we’ve had a top five car every night out,” said Griffith beside his Al Davis Carpet and Laminate/Crown Battery/McDonald’s restaurants//Youngs Breading and Batter Mix/Tackle Box 2/JLH General Contractor backed #40.

“We are on a roll right now. This thing is just so fast and easy to drive. I have to thank my dad and everyone who helps,” said Roepke beside his Village Inn/Perkin’s Tree Service/Johnny’s Electric/Vision Quest backed #88.

Mike Linder and Philo would lead the field to the green in the 410 sprint feature, with Philo grabbing the lead while fourth starter Craig Mintz moved into second with Linder, Brandon Martin, Greg Wilson and Phil Gressman in tow. Philo would blast around the track’s high side to pull away while Mintz and Martin battled for second.

Philo would catch the back of the field on lap six while Mintz and Martin continued to race side by side for second with Gressman in fourth followed by Linder and Wilson. Martin would use lapped traffic to grab second on lap seven, while Philo continued to lead.

With 11 laps in the books, Martin had closed to within a car length of Philo with Mintz, Gressman and Wilson battling hard for third. On lap 13, Philo slipped off the track exiting turn two, allowing Martin to claim the lead. Martin would pull away while Philo battled with Gressman, Mintz and Wilson.

With nine laps to go, Martin’s left rear would explode exiting turn four and at the same time, Gressman would spin off the back stretch with a flat right rear tire. The restart running order was now Philo, Wilson, Chris Andrews, Linder and Duane Zablocki. Philo and Wilson would run side by side when the green reappeared with Andrews right on their rear bumpers. With three laps to go, Andrews would spin to bring out the final caution.

On the restart, Phil bolted back to the top while Wilson was glued to the bottom and ran to the leader’s inside as they raced to the white flag. Philo hit his marks perfectly the last lap and had only a slight bobble coming to the checkered as Wilson tried to race under him. Philo took the victory by a car length over Wilson, Linder, Zablocki and Caleb Helms.

Harper and Ken Hahn would pace the late model field, but a Larry Kingseed spin on the start would necessitate a complete restart. Harper would take the lead when the green came back out with John Bores moving into second with Hahn, Ryan Missler and Mike Bores in tow.

Mike Bores and Missler would get together in turn three on the second lap, with Missler spinning and collecting John Mayes Jr., ending both of their nights. A lap would be recorded before the caution would fly again for a Nate Potts spin. A lap and another caution for another Potts’ spin.

Each time the cautions would wipe out a big lead by Harper. When the green came back out, Harper ran off and hid as a tremendous battle ensued for second between John Bores, Mike Bores, Ken Hahn, Jeff Babcock and Wayne Maffett Jr. Mike Bores would take second on lap nine with John Bores trying to hold off Babcock and Dusty Moore. Babcock would take third on lap 12 and drive around Mike Bores for second a lap later.

With nine laps to go, Babcock was quickly closing on Harper with Mike Bores, John Bores, Moore and Rusty Schlenk in pursuit. Harper would begin lapping cars with seven laps to go as Babcock pulled in on his rear bumper. But, Babcock would fly off the high side of turn one on lap 19 to bring out the caution.

On the ensuing restart, Mike Bores would drive under Harper, executing a slide job in turns one and two, Harper would return the favor in the next corner, but Bores lead lap 20. Harper would drive back around Bores on lap 21 to regain the lead as they raced side by side. Once Harper got back into the lead, he would regain his momentum on the high side of the track and pulled away the remaining five laps for the victory. Mike Bores, Schlenk, Moore and John Bores would round out the top five.

Griffith and Ryan would bring the 305 sprint field to the green with Ryan grabbing the lead while Griffith was trying to fend off Dustin Dinan for second. Dinan would take second on lap three as Ryan flew away out front. As Ryan hit lapped traffic by the seventh circuit, Dinan closed quickly with Griffith, Paige Polyak, Nate Dussel and Steve Rando in pursuit. Nate Reese would spin on lap eight, giving Ryan a clear track.

On the restart Ryan would pull away while Griffith blasted around Dinan into second. With 11 laps scored, Ross Moore would spin to bunch up the field again. Ryan would lead on the restart over Griffith, Dinan, Polyak, Dussel and D.J. Foos. Ryan looked headed to his first ever sprint car win, as Griffith, Dinan and Polyak put on a show battling for second.

Ryan would begin lapping cars again on lap 18, but looked like a veteran slicing his way through the field. But, with two laps to go, Moore would spin again, putting Griffith right on Ryan’s tail. On the restart, Ryan would go to the bottom of turns one and two while Griffith flew to the outside, getting a good run on Ryan as they drove into turn three. Griffith would fly under Ryan and slide up in front as they raced to the white flag. Once in front, Griffith would drive away to the win with Ryan, Dussel, Foos and Dinan rounding out the top five.

Bob Dible and Jeff Wank would pace the dirt truck field to the green, but a massive pile-up on the start would necessitate a complete restart. Dustin Keegan, who benefitted from the opening lap crash that claimed Wank as one of the victims, would now start on the outside of row one and would grab the lead when the green came back out.

Keegan would lead Dible, Brian Arnold, Roepke and Curt Inks. Roepke would drive from fourth to second on the second lap with Dible, Arnold, Art Ball and last place starter John Ivy in tow. The caution would fly for a Tony Siferd spin with five laps recorded. On the restart, Roepke would drive to Keegan’s inside to challenge with Dible trying to hold off Ivy and Arnold for third. Kyle Cline would spin on lap eight just as Roepke took the lead from Keegan. On the ensuing restart, Arnold would spin.

When the green reappeared, Roepke would pull away as Keegan and Ivy battled for second. Keegan would get into the back of Ivy in turn three on lap nine, with Ivy spinning. On the restart Roepke would again pull away with Keegan now coming to a halt with mechanical issues.

With six laps to go, the restart order was Roepke, Dible, Ball, Andy Keegan, Brian Sorg and Arnold. Roepke would pull away to a huge lead while a great battle for second was underway between Dible, Ball and Andy Keegan. Ball would take second on lap 13, but could not close as Roepke took the checkered. Ball, Andy Keegan, Dible and Sorg would round out the top five.

Attica Raceway Park will be back in action for the UMP Summer Nationals Hell Tour for the late models and modifieds on Friday, July 13. The 305 sprints will also be in action.

Go to www.atticracewaypark.com for more information.