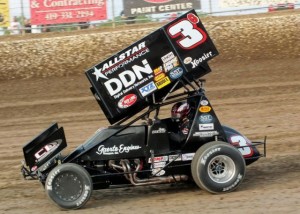 Shane Stewart looked to defend his LoneStar Nationals win over the weekend at the LoneStar Speedway, but an opening lap wreck quickly dashed those hopes.

With a unique format at the LoneStar Nationals, Stewart was able to lock in the Saturday night feature by way of his performance on Thursday night.

Starting on the front row of his heat, Stewart was able to score the win aboard his Red Line Oil/Media Tile/DDNi machine, and earned a spot in the top-eight redraw, in which the five pill was pulled.

On what was a very rough and fast track, Stewart was able to methodically carve his way forward, as he quickly reached the second spot, and set his sights on Justin Henderson.

Tip-toeing around large ruts, Stewart was able to keep his wheel pointed in the rich direction, but was unable to chase down Henderson, and settled for the second spot, which locked him into the feature on Saturday night.

After spectating the races on Friday night, Stewart and his 3G Motorsports team were ready for action on Saturday, and pulled the one pill during the redraw, putting him on the pole for the 40-lap feature event.

As the race got underway, Stewart’s night came to an end, as fast as it started. Stewart caught a rut in the third turn, and sent his machine in to a wild crash towards the catch fence. Stewart escaped uninjured, but his night was over.

“We had a great car all weekend, but unfortunately the track was rough all weekend too, and you had to be careful,” he said. “We got into one of the ruts on the first lap, and that was it.”

ON TAP: Shane will now head to California, and team up with Paul Silva to run the Jeff Gordon Children’s Foundation/Kick-it No.57 for the 19th Annual Trophy Cup this Friday and Saturday.

STAY CONNECTED: For all of the latest news on Shane Stewart visit his website at www.shanestewart.com or become a fan of his on facebook at www.facebook.com/ShaneStewartRacing.  You can also follow him on twitter @ShaneStewart57.