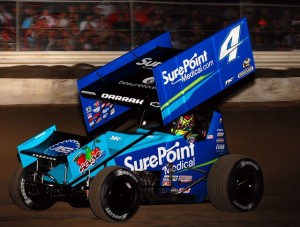 Following a quick offseason that just saw Darrah compete in January at the Chili Bowl, he and his SurePoint Medical/Great Clips/Ollie’s Bargain Outlet team kicked their 2013 season off on Friday and Saturday night with sixth and 13th place finishes in Ocala, FL.

Scheduled to compete on Thursday in Georgia, rain pushed back the season opener to Friday night, and Darrah kicked his season off by timing in fifth fastest.

Heat race action was tough on the Red Lion, PA driver as a sixth place finish on a tight track forced his Sage Fruit/ASE/Quaker State machine into the evening’s B main.

Starting on the front row of the B main, Darrah, lost the drag race into turn one, but settled into the second spot, and laid down some strong laps en route to securing a transfer spot into the feature event.

Getting his time back from qualifications, CD4 lined his Curb Records/Hendrickcars.com/Freightliner backed entry up in the sixth row for the 30-lap feature event,

With the track in great shape for the feature event, Darrah slowly worked his way up towards the top five, as he crept into the ninth spot when the caution flew on the second lap.

Taking advantage of three more stoppages, Darrah was able to work his way up to the sixth spot when the race concluded.

“This is a nice way to kick off our season,” Darrah said. “We timed in well, had a tough heat, but ran well in the B, and moved forward in the A. It was a nice shake down for sure, and I can’t thank all my guys for their hard work.”

Saturday night the action again was at the Bubba Raceway Park in Ocala, FL, and Darrah again was fast out of the box.

On a very slick track, Darrah timed in fifth fastest again, putting him in the first heat. Starting in the third row, Cody again had trouble moving forward, as he finished in the fifth spot and was forced into the B main again.

Starting on the pole, Darrah got the jump over Lance Dewease, and hugged the bottom on the deteriorating track to pick up the win, and again transfer to the A main.

Again starting in the 11th spot, Darrah looked to be in a good spot, as the feature looked to be a fight on the bottom of the track.

Slipping back to the 13th spot of the feature, Darrah simply held his spot, and stayed in line as the track began taking rubber early, not allowing for much racing.

Darrah would save his tire, and close his weekend with a 13th place finish.

“The result on Saturday wasn’t great, but it’s tough to do much when the track is like that,” he said. “We will be fine once we get a little better in heat races, but it’s early, and we have a few more races until the World of Outlaw season kicks off.”

ON TAP- Darrah and his KKR team will return to action on Wednesday night at the Volusia Speedway with the All Star Circuit of Champions.

STAY CONNECTED- Check in to www.codydarrah.com or visit his facebook page, http://www.facebook.com/pages/Cody-Darrah/164513250262145?ref=ts for the latest news on Cody. You can also follow him on Twitter @CodyDarrah.