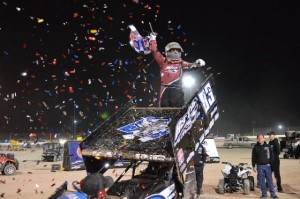 What is one to do after sweeping their final two nights in Australia on Saturday and Sunday? Promptly fly home to the states and pick up their first US win the following Thursday night just as Tim Kaeding did, as he scored three top-fives with the World of Outlaws.

Landing back home on Tuesday afternoon, Tim Kaeding headed to Las Vegas, NV to join his Roth Motorsports team for a trio of World of Outlaw races last week.

With past success in ‘Sin City’, the driver simply known as TK, put his jet lag on the back burner as he timed his Roth Enterprises/Mobil1/Weld Wheels backed machine in 16th fastest Wednesday night, just making the heat inversion, and starting on the pole of his heat.

Scoring the win, TK started and finished 10th in the dash, lining his Brown and Miller/Astro Titanium/3H Cattle machine in the fifth row of the feature event.

On the well-prepared track, with huge wind gusts, TK did what TK does, and that is electrify the fans.

Rolling the top of the track, TK made some late moves in traffic to score the fifth place finish, then proceeded to catch some shuteye.

“I was exhausted Wednesday night, but our Roth Motorsports car was awesome,” he said.

Returning to action on Thursday night, TK looked to back up his 2012 win at the Speedway, and he started the night off on the right foot as his 13th quickest qualifying effort put him on the front row of his heat again.

“If you can’t be in the top four with the WoO qualifying, the last four in the inversion is not a bad spot to be in either,” he said.

Winning his heat for the second consecutive night, the San Jose, CA native made the dash where he lined up in the seventh spot.

Hitting the loud pedal, Kaeding worked his way up to the third spot, as the checkered flag flew, putting his Kaeding Performance/Kent Performance Center backed entry in the second row of the feature.

When the green dropped in the feature, TK simply motored past Donny Schatz, and jumped out to an early lead.

Working to bottom of the speedway, Kaeding quickly motored to a sizeable lead, but Schatz, slowly tracked him down.

Getting in traffic around the halfway point, Schatz was able to grab the point, as Kaeding dropped to second.

Hounding the five-time champ, TK brought the crowd to their feat, as he drove by Schatz on the 21st circuit, and checked out.

Kaeding went on to pick up the win, and was very animated in victory lane.

“These outlaw races are tough to win, and to win our second race out is a testament to our team,” he said. “I can’t thank Dennis, Teresa (Roth), and the entire team for their effort, and support.”

Taking Friday off, the team headed to Tucson, AZ to take to the Tucson International Raceway on Saturday night.

With 30 cars checked in, TK timed in 11th quick, and went on to win his third heat race of the week, putting him in the all-important dash.

On what was the narrowest track of the week, Kaeding would start eighth in the dash, and finish eighth, putting him in the fourth row of the 30-lap feature.

Starting in the fourth row, TK would try everything in his arsenal to get rolling forward, and it worked at times, as he would end his week with a fifth place finish, his third top-five of the week.

“We are awesome right now, and I cannot wait to get back to Tulare this weekend,” he said. “We have been strong their in the past, and I can’t wait to see my California fans.”

ON TAP: TK and his Roth Motorsports team will head to the Thunderbowl in Tulare, CA this Friday and Saturday night.

STAY CONNECTED: Stay connected with TK during his 2013 season by following him on Twitter @Tkaedingracing.