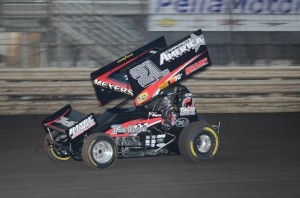 On the weekend when NCAA brackets are announced, there was excitement going on at Thunderbowl Raceway in the form of the bracket like racing format of the STP World of Outlaws Sprint Car Series. The two may seem like they may not have much in common, but two northern California based teams have two back-to-back championships — Jason Meyer’s Elite Racing and San Francisco University. Although the team has changed to Tarlton Racing, there is one constant — Meyers was looking to notch a victory in his home state.

On the first night of racing at Thunderbowl Raceway, Meyers began his night in the 13th position. The Californian fell back to 19th during the skirmish for positions during the opening laps, but rebounded quickly on a tough track. By the first time the red flag was flown on lap 8, the two-time champion had climbed up to the 17th position.

With a very narrow racing groove, Meyers expertly maneuvered his way as high as the 14th position. The former champion, tempted fate and got out of the preferred racing line. The result was falling back to the 17th spot. During the final laps of the race, Meyers found himself in a heated battle with fellow Californian Paul McMahan. On the final lap, the 21M of Meyers had the 51 of McMahan in his sights and made his move. With a last lap pass, Meyers finished in the 16th position while Tim Kaeding celebrated in victory lane.

Meyers held on to his tenth place running spot during the subsequent restarts. On Lap 23, Meyers had his Tarlton Racing 21M in the tire tracks of Kraig Kinser’s 11K and made his move. Over the next several laps, Meyers and Kinser passed the position back and forth. At the end of the 35 lap contest, the two time champion fell back into his groove and was forced to settle for a 10th place finish, while Craig Dollansky took the win.

“Last night we finally had the racecar that we have been working to put together,” explained Meyers. “The problem was the track took rubber which kind of sealed our fate. We fought as hard as we could and are glad we salvaged a top-10 finish.”
Up Next

It is hard to believe that the champion will be entering a track he has not raced on before. The new 3/8-mile dirt track at Stockton 99 Speedway in Stockton, California will be holding its grand opening on Friday night, March 22. After, the Outlaw Champion will be returning to Silver Dollar Speedway for the Mini-Gold Cup.

“The second night we had the car where we wanted it, so I am excited for this weekend,” Meyers stated. “The 21M is ready to take on Stockton and the Mini-Gold Cup. This weekend my sweet little 2-year-old daughter Presley asked me why I’m not going faster at the races, so I am going to use that as my motivation to go out there and do better next weekend.”