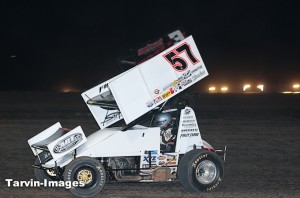 For 32 laps on Saturday night, Shane Stewart was in a league of his own as he dominated most of the Dave Bradway Jr, Memorial race at the Silver Dollar Speedway, but a broken U-joint forced his Silva Motorsports No.57 machine in the infield for the final eight laps.

“It is a huge bummer to have a car that good, and have something break,” Stewart said. “Paul Silva gave me a great car, and I guess it’s a good feeling knowing I had a car good enough to win a Chico, a place that has had my number at times.”

Stewart was one of the strongest cars all night long, as he opened the night up by timing his Lucas Oil Products/A.R.T. Speed Equipment/Pro Bilt Construction machine in fifth fastest.

Lining up in the second row of his heat, Stewart quickly jumped to the lead, and never looked back, as he picked up the important heat win to lock himself in the dash.

Starting on the front row, alongside his teammate for the weekend, Rico Abreu, Stewart slipped back to the second spot, and chased Abreu across the stripe, putting his machine on the front row for the 40-lap feature event.

When the green light’s flickered on for the finale, Stewart quickly gunned to the lead as he rode the cushion in turns one and tow, and pedaled the bottom in three and four.

Seemingly in a league of his own, Stewart carved his way through lapped traffic to near perfection, and was solid on his restarts.

With just eight laps remaining, disaster struck for Stewart, as his U-joint broke, and he pulled his machine into the infield, handing his lead to Abreu.

“We were awesome, and it’s a bummer not to win such a big race, but it is pretty cool to see Rico Abreu win his first weekend out with A.R.T. Chassis.”

Friday night, Stewart was also in action at the Silver Dollar Speedway and he opened the night up by timing his Palmero Properties/Finley Farms/Car and Fleet backed machine in second fastest.

A fourth place finish in his heat, put him in the feature event, where he started in the second row.

Battling with Rico Abreu for the second spot, Stewart slipped back to the third spot, when Allard got by both him and Abreu.

Getting past Dominic Scelzi in the middle of the feature, Stewart would settle for the second spot.

ON TAP: Shane will now return to action on May 17th in Attica, OH and May 18th in Plymouth, IN aboard the Joe Gaerte owned No. 3g.