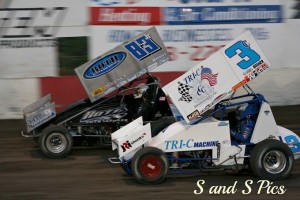 In action with the King of the West Series for a pair of events at the Tulare Thunderbowl over the weekend, Willie Croft pocketed a fifth place finish on Saturday night before fighting a wicked racecar and scoring an 11th place finish on Sunday night.

Croft and his Tri-C Motorsports team got underway on Saturday night over the busy holiday weekend, and Croft’s first order of business was timing the Tri-C Machine/JRI Shocks/NAAKE backed entry in eighth fastest.

Lining up on the front row of his heat race, Croft hooked up in an entertaining battle with reigning series champion, Jonathan Allard, as the duo slid back and forth for the lead, but Croft settled for second, and still earned a trip to the all-important dash.

Coming out of turn four and crossing the flag-stand starting the third lap, Croft zoomed around Meyers and took the lead, on the picture perfect track.

Out in front, Croft had a very strong car as he looked to pick up his third win, as he held off a feisty Meyers.

In traffic, Croft made the slightest bobble on the 17th lap, and gave up the lead as he slipped back to the third spot.

A red on the 19th lap bunched the field back up, but the restart didn’t go Croft’s way as he lost a spot to Rico Abreu, and as the checkered flew, Croft scored a fifth place finish.

“Friday we had a really good car, but the driver just made a little mistake in traffic that cost us the lead and a couple of spots,” Croft said.

Sunday night action returned to the Thunderbowl, and the night did not go exactly how Croft and his team had hoped, though it started off very well.

In time trials, Croft timed his Holey Smokes BBQ/Christian Stover Foundation/ButlerBuilt entry in second fastest, putting him in the second heat, where he would score a third place finish.

In the feature event it was apparent Croft’s car was off, as the Sacramento, CA driver had his hands full, and wasn’t able to get moving forward.

Trying several lines to find something to his liking, Croft would hang on and score an 11th place finish.

“We were just off in the feature on Sunday night,” Croft said. “In the big picture it was an okay night, and now with the series taking a couple weeks off, we will race around our area and see if we can get better.”

With his weekend results, Croft has now leap frogged into the third place in series standings.

ON TAP: Croft will now head to the Placerville Speedway for a night of action with the California Civil War Series on Saturday night.