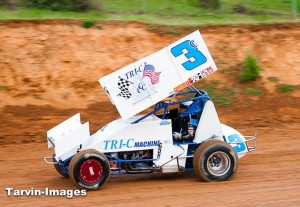 Following a nasty crash at the Silver Dollar Speedway on Friday night, Willie Croft survived a wild feature at the Placerville Speedway where he scored a fourth place finish, and moved up to third in series standings.

“After Friday night’s race, I am just glad we survived the carnage at Placerville, and got a fourth out of the deal,” Croft said.

With 23 cars on hand at the tight bullring, Croft timed in sixth quickest, putting him in the third heat.

A chaotic start with the two cars on the front row allowed Croft to jump into the top spot, as he looked to earn a spot in the dash.

Out up front comfortably, Croft’s nose-wing collapsed, and he began fighting his car, as it became tough to maneuver on the cushion.

Hitting the cushion, contact with Tommy Tarlton ripped the muffler off of Croft’s Tri-C Machine/JRI Shocks/NAAKE entry and he was disqualified from the event due to California State noise regulations.

With no B-Main and due to his time trial, Croft found himself in the fifth row for what would be a very wild, and lengthy feature event.

Plagued by cautions, and red flags, Croft was able to keep his nose clean as he ran just outside the top-five during much of the feature.

The last eight laps proved to be the most entertaining of the night, as the Sacramento, CA driver worked his way up into the fourth spot, as he chased after Brent Kaeding, and the lead duo of Shane Golobic and Jonathan Allard.

Unable to get up to challenge the top-three, Croft settled for a fourth place finish.

“We were really good to start the feature, but late in the race the track started to slick off, and our car went away,” he said. “We didn’t have anything for the top-three, and we were really a fourth place car.”

Friday night, was a rough night for all that were involved on the Tri-C team.

Starting on the front row of the feature event, Croft was involved in a very scary accident as the field came around the complete the first lap.

Running the high-side of the speedway, race leader, Brad Bumgarner, did a wheel stand off of turn four, and when he landed, his car shot right and made contact with Croft, sending him flipping down the front stretch; everything was destroyed.

“It was the hardest crash of my career, and I can’t thank ButlerBuilt Seats, and A.R.T. Chassis for doing their job, and helping keep me safe,” he said.

ON TAP: Croft will now be a busy man as he will head north with his Willie Croft Racing No.29 machine and compete with the ASCS Northwest Region for three night of their Speedweek Monday, Tuesday, and Wednesday, before returning back home to pilot the Tri-C Machine No.3c on Thursday night.