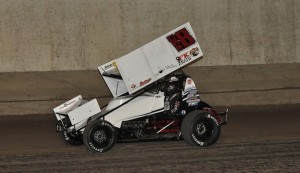 Bruce Jr. had a car capable of picking up his first Lucas Oil ASCS National Tour victory at I-90 Speedway since 2008, but a couple of tough pill draws and tricky track conditions relegated him to a fifth-place result – his 12th top five of the season.

“We drew dead last in the heat race and was able to go from seventh to third and able to get some points to get us in the redraw,” he said. “Unfortunately, we kept the ole bad draw streak going.”

Bruce Jr. earned the third most points after maneuvering from seventh to third in his eight-lap heat race. However, he pulled the second-highest number – seven – to start the main event on the inside of the fourth row. With the track deteriorating, the feature was shortened to 25 laps and Bruce Jr. tried to make something happen early.

“On the very first start I actually tried to slide a couple of people in (turns) three and four and I got in the wall and lost a couple of spots,” he said. “So I actually had to pick them off. I was able to go in and dive bomb to the bottom and slide up to the rubber, using the rubber like a cushion. We were actually passing cars in the rubber.

“The track wasn’t very good. We had a really good car, just not a good track to race on. It was pretty much rubber down from the word go. Everybody got in line and pretty much rode it out.”

Bruce Jr. rallied to garner his ninth top-10 finish in the past 10 races.

The Lucas Oil ASCS National Tour’s trip to the Northwest continues with a pair of races this week in Montana. Bruce Jr. and the tour will compete at Billings Motorsports Park in Billings on Monday and Electric City Speedway in Great Falls on Wednesday before a Washington doubleheader at Grays Harbor Raceway in Elma on Friday and Saturday.

“Honestly I love the way ASCS has it scheduled this year,” Bruce Jr. said. “Any time you’re on a 20-hour trip and you can stop for a couple of days and race, it makes the trip seem a little shorter for one. And for two, who doesn’t want to stop and race?”

Here is a link for RacinBoys’ footage of Bruce Jr.’s victory at Boyd Raceway on April 26: http://www.youtube.com/watch?feature=player_embedded&v=Wx3nrOFTDyg

Bruce Jr. has black and white t-shirts in adult sizes for sale at his race trailer at each of his races. For his schedule, visit http://www.TonyBruceJr.com/schedule.