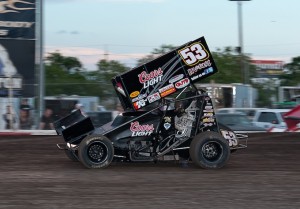 Making a last minute decision to get two shows in over this past weekend, Andy Gregg scored a fourth place finish at the Silver Dollar Speedway on Friday night, before having a disastrous Saturday at the Placerville Speedway.

Bolting his 410ci engine in on Friday, Gregg and his Coors Light/LivFast/GUTS Racing team headed to Chico, CA, where Gregg jumpstarted his night, by timing in second fastest.

Lining up sixth in his heat, Gregg picked up a third place finish, to put himself in the feature event inversion, where the eight pill was drawn, putting him in the fourth row alongside Andy Forsberg.

When the 25-lap main event got underway, Gregg began weaving his way towards the front, as he fought threw slower traffic.

Chasing Forsberg through the fray, Gregg got into the fourth spot, late in the feature, as he pressured Keith Bloom.

Battling Bloom the last few laps, Gregg pulled alongside of him, but was unable to make a pass for the third spot, and settled for fourth.

Saturday night, Gregg was back in action with his 360ci engine, at the Placerville Speedway.

Again, timing in second quickest to Forsberg, Gregg spun out in his heat, and was forced to make a stop in the night’s B main.

In the B, Gregg had a strong lead, but as he ran the bottom of the speedway, he made contact with the infamous drain in turns one and two at the speedway, and cut a left front tire down.

Opting to head to the work area for repairs, Gregg restarted, but was unable to get into a transfer spot, and his night was over in the B.

“It was a frustrating night at Placerville,” he said. “I made a mistake in the heat, that put us in the B. I was in a transfer spot, and brushed the drain at the bottom of turns one and two, and ended our night essentially.”

ON TAP: Gregg will again be back in action this weekend at the Silver Dollar Speedway and the Placerville Speedway.