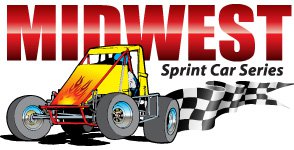 Blake Fitzpatrick, of W. Terre Haute, IN, started sixth in the feature event and had moved up to second place by lap nine.  Leader Jon Stanbrough continued at the point until lap 14 when Fitzpatrick took over.  Stanbrough, who started on the outside pole, would finish second with Brady Short  a close third at the finish.  Wes McIntyre and rookie driver Carson Short rounded out the top five.

The feature ended with the checkered flag being replaced by the red flag.  As the leaders completed the event, Braylon Fitzpatrick flipped his sprinter in turn four.  He summed the incident up in a few words.  “I was trying too hard, got into the wall, and then upside down!”  But from there it was a short walk to victory lane to congratulate his brother on an exciting win.  The brothers were late in the season in fielding cars and did not make it to their first MSCS race until August.

The feature was career win number two with MSCS for Blake Fitzpatrick.  “You don’t know how good it is to be back in victory lane.  I love this track and it is my favorite place to race.”  He was hooked up!  Blake races a Spike Chassis.  The car is owned by John Fitzpatrick, sponsored by First financial Bank & Lucas Oil, and powered with an engine built by J & D Performance.

Two MSCS heat races were held.  Jeff Bland Jr. held off Blake Fitzpatrick to win the first one.  Brady Short won the second heat as Jon Stanbrough and Braylon Fitzpatrick battled for the runner-up spot.  Both heats were won by drivers starting back in sixth spot.

Rookie Points leader Bradley Sterrett finished sixth in the feature.  Mitch Wissmiller, Levi Shields, Braylon Fitzpatrick, and Brian Karraker finished in the top ten.  Wissmiller was the Keizer Aluminum Wheels Hard Charger of the Race in moving up seven spots.  Chris Babcock was presented with the Wilwood Tuff Brakes Award based on his 11th place finish.

The MSCS Sprint Cars will return to Tri-State Speedway on Saturday October 12th for the Harvest Cup.  The event will be the final race this season.  The Sprint feature will pay $4,000 to win.  The UMP Modifieds will be running with $1,000 going to the winner.