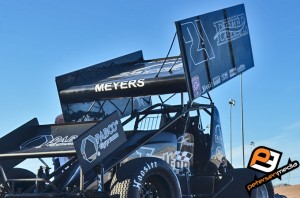 Kicking off the 2014 season in Las Vegas, NV, Jason Meyers and his Tarlton Racing team brought their ‘A’ Game, as Meyers charged from 19th to ninth on Wednesday, before recording a very strong third place finish on Thursday night aboard his Elite Landscape Construction/Tarlton and Son, Inc./Tachi Palace Hotel and Casino No. 21 machine.

Timing in 19th fastest on Wednesday night, Meyers finished his heat in the fourth spot, and lost his torque-ball housing just as he took the checkered flag, and the crew went to work.

Getting everything replaced, Meyers lined up for the feature in the 19th spot, and on the slick ½ mile ‘hotfoot’ had his elbows up as he raced his way around the top of the speedway.

Though he had a very strong car, Meyers was unable to overcome the deep starting position, and ended up with a ninth place finish.

Timing in third fastest on Thursday night, Meyers was unable to put his machine in the night’s Dash, resulting in him starting in the 11th spot, but his Tarlton Racing machine had what seemed to be a very good set up in it.

Getting off to a slower start, Meyers got better as the laps clicked off, and took advantage of several double file restarts to become a factor with five-laps to go.

Battling with Kerry Madsen, Jason Sides, and Steve Kinser, Meyers was able to get into the third spot with a lap to go, and narrowly missed out on the second spot, by under a car length at the checkered flag.

“I think we had a really good car out here after only deciding to do these races a month or so ago,” Meyers said. “I have to thank the Tarlton family for the opportunity they have given me, and Paul Baines and the guys for all of their hard work.”

If you would like information on how to join the Tarlton Racing team, please do not hesitate to contact Tommy Tarlton at TTarlton@tarltonandson.com.

Tarlton Racing would like to thank Elite Landscape Construction, Tarlton and Son, Inc., Tachi Palace Hotel and Casino, Pabco Gypsum, Bandy and Associates, All Star Performance, Corporate America Investments, and BG Lubricants for their support through the 2014 season.