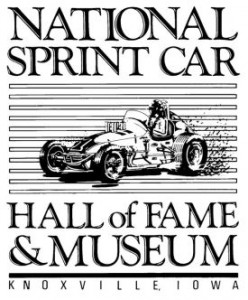 Knoxville, IA —  (April 2, 2014)  —  The 34-night 2014 racing season begins on Saturday, April 19, at the Knoxville Raceway and tickets remain available for seats on the second-floor of the National Sprint Car Hall of Fame & Museum, which is located on the legendary half-mile dirt track’s turn number two.  Tickets for seats on the second-floor are available for the entire racing season, in addition to nightly tickets being available for both Saturday night sprint car racing and all special events at Knoxville Raceway.

Second-floor, club-level seating is an open area which can provide viewing for groups and parties as large as 150 people.  The second floor of the museum is also heated and air-conditioned, and offers closed-circuit television, wireless internet, and the track’s public-address system.  Also, second-floor ticket-holders can bring in their own food and drinks on race nights.  At this time, tickets are available for all race nights on the second floor, including for the Wednesday-Saturday, August 6-9, fifty-fourth annual FVP Knoxville Nationals, which will be sanctioned by the World of Outlaws (WoO) Sprint Car Series.

The 34-night season at the Marion County Fairgrounds oval, which begins on April 19 and extends through September 27, is highlighted by these special events: