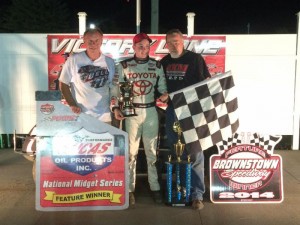 Brownstown, IN — (May 31, 2014) — Christopher Bell took his seventh POWRi Lucas Oil National Midget Series victory of the 2014 season becoming the first ever POWRi Midget World Champion at the 1/4 mile semi-banked Brownstown Speedway, closing the Ford EcoBoost Challenge Weekend. The two events held during the Ford EcoBoost Challenge Weekend were the finale for the POWRi Midget World Championship which will be broadcast on MavTV. “This trophy is a credit to all the guys that I got to work with. It really is a team effort,” explained newly crowned POWRi Midget World Champion Christopher Bell. “I was very fortunate down in New Zealand and Australia and thanks again to Keith [Kunz] because I have one of the best rides available. This is such a cool deal to go to New Zealand and Australia and race against some of the best midget drivers in the world.”

Pole-sitter Darren Hagen of Riverside, California led the opening four laps of the 30 lap feature event, but was unable to hold off the relentless Michael Pickens of Auckland, New Zealand. Pickens took the lead on lap five in his RFMS Racing DRC Chassis, attempting to pull away from the field until a caution for the immobilized racecars of Danny Stratton and Nick Knepper in turns one and two. When racing resumed, Pickens did his best to put distance in between himself and the field utilizing the high line, literally running on the ragged edge of Brownstown Speedway, leaving Hagen to deal with the two Keith Kunz/Curb-Agajanian Motorsports’ Toyota-powered Bullets of Tanner Thorson and Christopher Bell that were making their way through the pack. “Racing with [Christopher] Bell is one of the best things you can do,” explained second place finisher Tanner Thorson. “I knew Darren [Hagen] was back there, I saw his front end, but I figured we could beat him.”

On the tenth lap, the caution flag flew again as Davey Ray looped it in turns one and two, collecting Michael Koontz who had nowhere to go. When racing resumed, Christopher Bell took second from Tanner Thorson of Minden, Nevada and then the lead from Pickens on lap 20. Bell would then go on to run away from the field, only being slowed once for the caution brought out by Shane Hollingsworth who slid off the track coming out of two. As laps began to wind down, Pickens jumped the cushion in turns three and four on lap 27, opening the door for Hagen’s Esslinger-powered Beast Chassis to re-enter the top three. “Hats off to my whole Great Clips team,” explained Darren Hagen. “We’ve been working on it all weekend trying to get it running. I’m proud to be here.” Rounding out the top five was Tyler Thomas in fourth and Michael Pickens bringing home fifth.