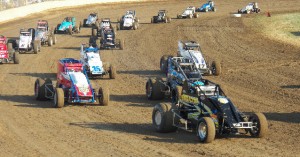 The Stoops Freightliner-Quality Trailer “Sprint Car Smackdown 3” unfolds this week at the Kokomo (Ind.) Speedway as the torrid battle for supremacy in the AMSOIL National Sprint Car series reached a fever pitch.

Dave Darland, chasing one of USAC’s most cherished all-time records, enters the three-night extravaganza with a miniscule five-point lead over Brady Bacon, while Bryan Clauson is just 34 points behind the leader. More than 200 points are available at Kokomo.

Darland has 51 career USAC Sprint wins to his credit and needs just one more to match the 52 recorded by Tom Bigelow during his spectacular career. Considering Darland’s past performance at his “home” track it’s not far-fetched to believe he could tie or surpass the record this week.

The “Smackdown” begins Thursday and continues Friday and Saturday, with 30-lap preliminary features and a 40-lap finale Saturday. In addition to significant lap prize postings totaling some $10,000, numerous performance awards have been posted, making this event a “signature” one for drivers and fans alike.

On Thursday night after the 30-lap feature, several drivers will participate in the inaugural “Snackdown,” to determine a winner in a food-consuming competition. More information on that will be released later.