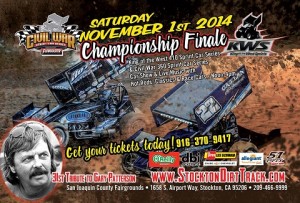 A look at the top-10 in points & winners this season with the Civil War Sprint Car Series presented by Flowmaster going into championship night at the Stockton Dirt Track on November 1. Shane Golobic holds a 94-point lead over three-time & defending series champion Sean Becker, as he looks to wrap up his first career Civil War title.

The 23-year-old from Fremont, CA has already claimed the Ocean Sprints presented by Taco Bravo championship and will be searching to add a second title to his 2014 resume. Golobic has driven the Keith Day Trucking/ Gabilan Ag Services No. 22 machine to one Civil War victory this year, with that coming in May at Silver Dollar Speedway.

Going into the final night in fact, there has not been a repeat winner in the previous 10 races held so far this year. The upcoming event will also be the Civil War debut at the Stockton Dirt Track. Previous Winged 360 winners at the 3/8 mile clay oval include Willie Croft, Tim Kaeding, Rico Abreu, Andy Gregg & Colby Copeland.

Also on the card at the 31st annual Tribute to Gary Patterson will be the King of the West 410 Sprint Car Series, in what is a first for Northern California Sprint Car racing.

To purchase your tickets for November 1 contact (916) 370-9417 and to view a seating chart log onto http://stocktondirttrack.com/ grandstands.pdf to find the seats you want. There will also be a car show and live band during the day from noon to 4pm behind the grandstands, so make plans to arrive early and enjoy the festivities with us.

Known as the “Dancing Phantom from Stockton,” the “Preacher,” the “Hostile Hippie” or just simply “GP,” Gary Patterson was one of the most colorful characters of his time and captured a number of major wins in his career, including the Gold Cup Race of Champions, the Super Dirt Cup in Washington and the Turkey Night Grand Prix at Ascot Park among others.

Patterson lost his life in a Sprint Car crash at Calistoga Speedway on Memorial Day weekend 1983 and an event in his memory has been held every year since. “GP” moved to Stockton, California in 1957 and actually began his career at the Stockton 99 Speedway. This season will be the second time we’ve paid tribute to Gary Patterson at the Stockton Dirt Track.

The physical address for the Stockton Dirt Track is 1658 S Airport Way, Stockton, CA 95206. For information on the speedway visit http://www.stocktondirttrack.com/