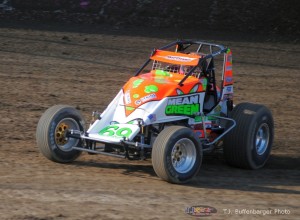 Brady Bacon of Broken Arrow, Okla. (National) and Damion Gardner of Concord, Calif. (USAC/CRA) sit atop their respective point standings entering the two-night program. Bacon’s lead over Bryan Clauson and Dave Darland stands at 53 and 78 points with enough points to create opportunity for the chasers. Gardner’s lead over runner-up Mike Spencer is a comfortable 210 points as he wraps up what will be his third series title.

Ballou’s 40-lap victory Saturday night was worth $20,000 to his Blakesley Auto/Deaton’s Waterfront Services Maxim/Ott team. He led the last 10 laps after passing Spencer on lap 31. He interrupted a race-long battle for the lead between C.J. Leary and Spencer, who traded the lead back and forth for the first 30 laps. Trailing the second-place Spencer at the finish were Bryan Clauson, Dave Darland and Ryan Bernal.

Brody Roa was injured during Wednesday’s practice session, but was released from a local hospital after treatment.