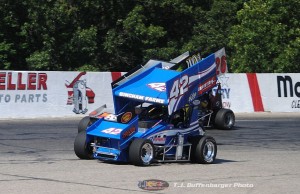 “This is a significant development for pavement open wheel racing in the Toledo area, and for this region,” said longtime Toledo business owner and Indianapolis 500 winning car owner Ron Hemelgarn. “We wanted to create some excitement, while supporting Toledo Speedway and its rich heritage of open wheel racing. Hopefully this $25,000 bonus will serve as an incentive to drivers and team owners for more crossover participation in the USAC Silver Crown race and both winged sprint car races at Toledo Speedway in 2015.”

The USAC Silver Crown race is May 1, the AVBBSS race is June 12 and the King of the Wing race is June 26. All three races are scheduled for Friday nights at the Toledo Speedway half-mile paved oval, and all three events will feature additional open wheel racing content. The May 1 event features all USAC sanctioned racing with the Silver Crown Series, HPD Midget Series and USAC Quarter Midgets in the 2nd annual Rollie Beale Classic. June 12 is the longest running and most successful open wheel race on Toledo’s schedule, billed as the All American Coach Fastest Short Track Show In The World and featuring the Adkins Glass MSA Super Modifieds alongside the AVBBSS winged sprints. The King of the Wing sprint race June 26 will be paired with the Top Speed Modified Series for the 2nd straight year. Collectively, the three racing programs comprise the Hemelgarn Racing/Super Fitness Triple Crown.

“Open wheel fans, drivers, team owners and sponsors have shown their strong support for our events at Toledo Speedway over the years,” said Toledo Speedway promoter Ron Drager. “When Ron Hemelgarn suggested we offer a big money bonus if a driver could win all three of these races it resulted in the creation of the Hemelgarn Racing/Super Fitness Triple Crown.”

Two of the chief racing officials from the series included in the Triple Crown—Andy Hillenburg of the USAC Silver Crown Series and Davey Hamilton of the King of the Wing Series—have driven at both Toledo Speedway and in the Indianapolis 500. Both Hillenburg and Hamilton have said the bonus will create a greater interest in all three events, and potentially will increase the number of drivers and teams entering the races.

“This is really exciting, for all three divisions now under the USAC banner to have this opportunity that Toledo Speedway, Ron Hemelgarn and Super Fitness have put together,” said Davey Hamilton, the creator of the King of the Wing and the recently announced Executive Director of USAC. “It shows the growth of open-wheel racing and will ultimately benefit the fans and racers. It’s a great opportunity and a great promotion.”