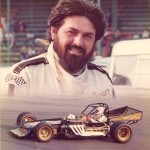 Oswego, NY — (March 16, 2015) — Oswego Speedway Hall of Fame member Ed Thompson passed away in the comfort of his own home, with family and friends by his side, early Friday morning.

A lifetime resident of Oswego, Thompson was a staple at the ‘Steel Palace’ nearly his entire life, serving as a crewman, welder, safety crew member, fabricator, driver, car owner, car builder, and sponsor.

Thompson’s passion for racing and Oswego Speedway was great and in 1970 ET, as most knew him, began his driving career on the dirt circuits.

By the mid-1970’s Thompson was a Supermodified racer at Oswego, driving the former Hemi-Hawk Supermodified formerly owned by Ed Cloce. Thompson would go on to build his own racers in the coming years, and while not earning a feature win at Oswego, he scored several Top20 point finishes and earned 11 Top5 finishes in his career including a fifth place finish in the 1980 International Classic 200.

Thompson was famously known for contending at the famed dirt ‘Moody Mile’ on the New York State Fairgrounds with his Front Door Tavern Special Supermodified during Super DIRT Week, swapping positions with some of the best dirt racers in the country on the World of Outlaws circuit.

During his time at Syracuse, Thompson took note of a young Supermodified competitor that was taking the mile by storm. That driver was Joe Gosek.

Since those days, Thompson became a staunch supporter of the Gosek Racing team, and could be found in the pits of the No. 00 nearly every event following.

Calling hours are set for Monday evening at Nelson Funeral Home on 11 W. Albany St. in Oswego from 4-7 p.m.

A celebration of like will take place on Tuesday at 11 a.m. at Nelson Funeral Home.