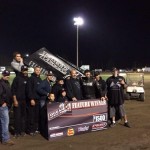 Easton, CA driver, Tommy Tarlton, kicked his 2015 season off in thrilling fashion on Friday night, as he picked up the win at the Ocean Speedway while in action with the Ocean Sprints presented by Taco Bravo.

“That was an awesome race right there,” Tarlton said in victory lane. “I hope all the fans enjoyed that one. I can’t thank all my guys and partners enough for letting me do this.”

With 23 cars checked in on Friday night, Tarlton got things started off in exciting fashion as he earned Ray Scheidts Electric Fast Time Honors in time trials.

Lining up for the 30-lap feature event in the third row, Tarlton made some quick moves on the extremely racy Ocean Speedway aboard his Elite Landscape Construction/Tarlton and Son Inc./Tachi Palace and Casino No. 21 entry.

Getting into the third spot, Tarlton would battle with Brad Furr for a few laps as he would take the second spot, and begin his pursuit on race leader, Brent Kaeding. Getting by Kaeding, Tarlton would break away from the field, until a pair of late cautions bunched the field back up.

The final caution flew on the 22nd lap, and the final eight laps of the race would be an all out battle between Tarlton, Kaeding, and Shane Golobic for the lead. Exchanging slide-jobs with Kaeding numerous times as they battled for the lead, Tarlton would also fend off Golobic’s attempts to grab the top spot as well.

Able to get some breathing room during the final few laps, Tarlton would hold on to the very popular main event win.

“I really enjoy coming to this track, and really hope we can pick up more wins as our season goes on,” Tarlton said. “Again, I just really need to thank everyone who makes this possible for us.”