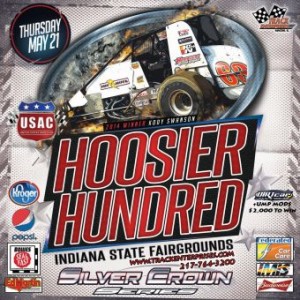 Anticipation is building with the huge entry list that has come together for the 62nd running of the Hoosier Hundred. The Thursday, May 21 event will be pivotal in the early battle for USAC’s 2015 Silver Crown Championship.

Thursday’s 100-mile race at the Indiana State Fairgrounds has tradition dating back to 1953. Defending Silver Crown Champion Kody Swanson is the odds-on favorite to repeat as the winner in Thursday’s race but with the list being large, it is tough to pinpoint who may step up to knock him off the pedestal.

Kody’s success of six victories in the last 11 Silver Crown races dates back to 2014 when he claimed the series crown, plus victories at both of this week’s venues. He enters the week with a nine-point lead over Jacob Wilson after winning the May 1 “Rollie Beale Classic” at Toledo, Ohio.

The UMP Modifieds will join the USAC Silver Crown cars for a $2,000 to win, $200 to start feature event. The pre-entry list for the Modified event includes the likes of Ken Schrader and Kenny Wallace but a healthy field of competitors that look to keep the NASCAR stars out of victory lane.

For further information on the Hoosier Hundred, visit www.trackenterprises.com or call 217-764-3200.