“We won at the end of April last year and we thought that was nice to get a win that early,” he said. “This is even earlier. It’s always nice to get them early in the season. Hopefully we can get even more wins than last year.” 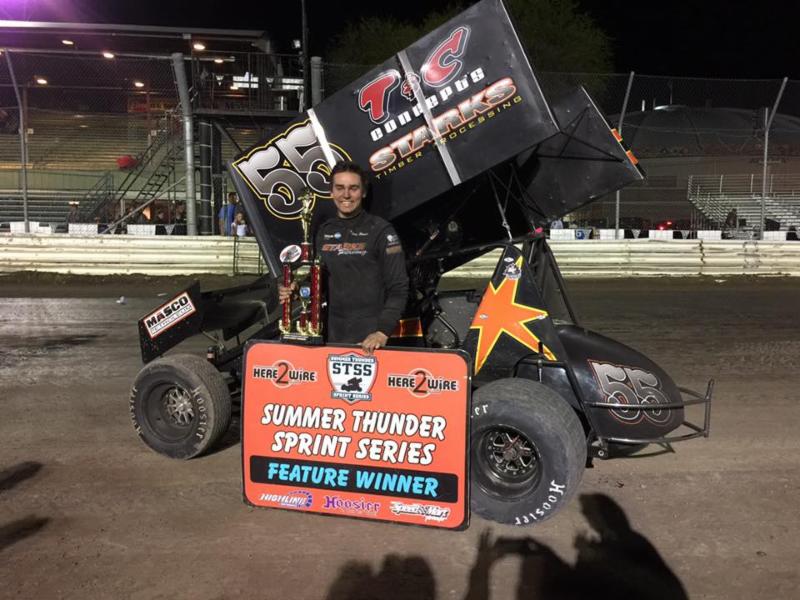 Starks, who garnered a career-best eight triumphs last year, opened last weekend by qualifying second quickest on Friday. He then advanced from fourth to second place in a heat race, which locked him into the feature redraw. Starks pulled the No. 3 during the random draw to start the 30-lap main event on the inside of the second row.

“We had a really smooth night going,” he said. “I felt really confident going into the main event, but the car didn’t feel right at all once we got rolling. It felt darty and all over the place. We ended up finding out under a red about 15 laps in that we had a broken left front spindle. The wheel and steering arm were flopping and barely holding on. That was an odd deal there.”

Starks, who was running fourth at the time, was unable to resume the race and he was credited with a 14th-place result.

Starks showcased similar early success on Saturday as he timed in third quickest during qualifying before maneuvering from fourth to second place in a heat race to lock into the feature redraw. This time he pulled the No. 5.

“The track was really tricky and different than it usually is,” he said. “We knew rubber was coming, but it was way different. There were some holes on the bottom in turns one and two so that prevented it from taking rubber down there. We had two complete lanes of rubber in turns one and two so it wasn’t much different than racing a two-groove track. In turns three and four there was a good patch of rubber up top with a little down below.

“We got to third within the first two laps. We chased down J.J. Hickle and passed him for second with six or seven laps down. Around Lap 12 we were battling for the lead in traffic when a caution came out. We had a restart and it took me a few laps to get my tires heated up. We ended up getting by the leader about the halfway point and started rolling. We had a few late-race restarts and I knew Jason Solwold was right behind me so I had to be perfect. We didn’t make any mistakes and came away with the win.”

It marked the second trip to Victory Lane in the last three races at Central Washington State Fair Raceway for Starks, who will return to competition this Friday at Carolina Speedway in Gastonia, N.C., and Saturday at Lancaster Motor Speedway in Lancaster, S.C., with the USCS Series driving for Jeff McCall.

Friday at Carolina Speedway in Gastonia, N.C., and Saturday at Lancaster Motor Speedway in Lancaster, S.C., with the USCS Series

Starks has t-shirts and hoodies for sale at http://www.TreyStarksRacing.com.

Starks Timber Processing is a logging business owned by Trey’s father, John, who is a third-generation logger. It has been based out of Washington for more than 15 years.

“Starks Timber Processing is what provides me the opportunity to race,” Trey said. “It has played a huge role in my life, both on the track and away from it.”

Starks would also like to thank Blue Dot Fabrications, SpeedMart, King Racing Products and Masco Petroleum for their continued support.