BRANDON, S.D. (Aug. 30, 2016) – Jack Dover reached double-digit wins for the fifth straight season and the seventh time in the last nine years thanks to a victory last weekend.

The triumph was Dover’s 10th of the season and it pushed his podium streak during Carpetland Nebraska 360 Sprints races to eight in a row. He has also won five of the last six features with the series. 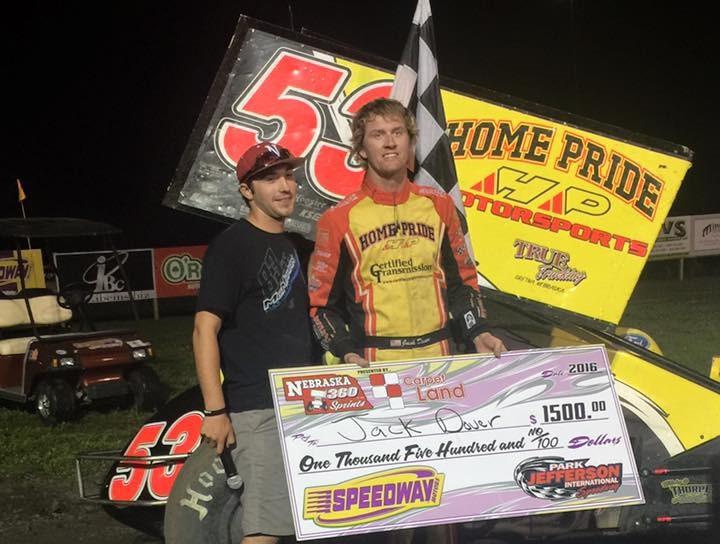 “It’s great to hit that mark of 10 wins in a season, but we’re not ready to stop there,” he said. “Hopefully we keep this momentum going. Last weekend was a good one for us.”

The action began on Friday at I-80 Speedway in Greenwood, Neb., where Dover won his Carpetland Nebraska 360 Sprints heat race to lock into the feature redraw. He pulled the third-highest number – six – to start the main event on the outside of the third row.

“Drawing the six kind of killed us,” he said. “The track was where you had to start on the front. It was locked down and heavy and fast. We got to third about halfway and rode there the rest of the way.”

Dover settled for a third-place result.

He returned to action the ensuing night at Park Jefferson International Speedway in Jefferson, S.D., with the series. Dover advanced from fifth to second place in a heat race to again make the feature redraw. This time he pulled the No. 3 to start on the inside of the second row.

“The track was really good and smooth, but it was locked down and fast,” he said. “The Moss Racing Engines power plant was a big factor. I got up to second right away and about three laps into it I took the lead on a restart. We put about a half a lap on second place, but halfway through my nose wing fell down. The car was a handful. Second place closed in, but we were able to hold on for the win.”

The weekend concluded on Sunday at Badlands Motor Speedway, where Dover finished where he started – third – in a heat race. That lined him up on the outside of the seventh row for the main event.

“In the beginning of the feature I thought we’d be a 10th-place car,” he said. “With about eight laps to go I started running the middle in the corners and passing cars one by one. We were up to fourth, but a red flag came out so I reverted back to fifth. If it would have been 30 laps I think I would have been a competitor for the win.”

Dover rallied from 14th to a fifth-place finish, which also earned him the Hard Charger Award for passing the most cars.

“I’ve got to thank Dave and Steve, who were helping me all week,” he said. “When I have guys like that who are experienced it makes my job easier.”

Dover is slated to return to 305ci winged sprint car competition this Friday through Sunday at Eagle Raceway in Eagle, Neb., for the RaceSaver IMCA Sprint Nationals. He will drive for Chris Roseland. The duo has three wins together this season, including two at Eagle Raceway.

Friday through Sunday at Eagle Raceway in Eagle, Neb., for the RaceSaver IMCA Sprint Nationals