By Tommy Goudge
(September 16, 2021) – The Pinty’s Knights of Thunder 360 Sprint Car series and Pinty’s Action Sprint Tour Crate Sprint Car series are set for their final visits to Merrittville Speedway in 2021. Warm weather, great racing, and Merrittville’s famous food will greet fans who make the trip to the Thorold, Ontario track, while the event will also be broadcast live on GForceTV. 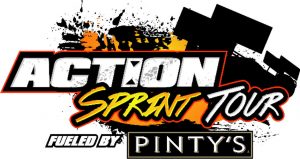 Jim Huppunen has a runner-up and three total top tens at Merrittville this season, but the results don’t show how competitive the veteran driver has been there this year. Huppunen spun and restarted at the back of the pack in two of the three races, including a charge to sixth last week. Other drivers to watch on Friday include Mikey Kruchka, Ryan Turner, Mack DeMan, and Aaron Turkey, who have all been on the podium at Merrittville this year.

Several teams had work to do after a rough night at Southern Ontario Motor Speedway last Saturday. Dykstra and Sheridan both crashed in the A-Main, while Ryan Fraser had engine trouble. The biggest incident of the night was Brett Stratford’s heat race crash which completely destroyed his BS39 car. All four drivers are planning to race at Merrittville on Friday night, including Stratford who took a runner-up finish in the most recent AST event held there. Darren Dryden scored the win at SOMS, his first in a Sprint Car and on a dirt track.

CHAMPIONSHIP CHASES
Jordan Poirier’s Knights of Thunder points lead was dwindling before last weekend’s events at Humberstone and Merrittville, but the Quebec driver put a stop to that trend by dominating the weekend. Poirier now holds a commanding 63 point advantage with three events left on the 2021 schedule. Ryan Turner moved into second in the standings last weekend, but Jim Huppunen is just one point behind in third. Josh Hansen and Travis Cunningham hold spots in the current top five, while DJ Christie is right behind Cunningham in sixth. Liam Martin, Cory Turner, and Jamie Turner are seventh, eighth, and ninth respectively, while Tyler Rand and Holly Porter are tied for 10th.