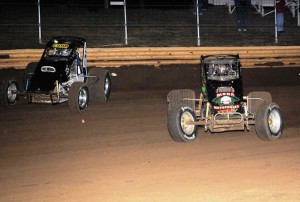 From Greg Parent
Stillwater, MN –The 2013 season for the UMSS Traditional Sprint Car Series (TSCS) will kick off on Friday April 26 at the St. Croix Valley Raceway and is tentatively set to conclude on Friday August 30 at the same track.  The popular non-winged series will be in its third season of competition, as the group continues to grow.
UMSS CDO Ron Bernhagen expressed his thoughts about the upcoming season.  “I believe there are 10-12 new traditional sprint cars being built for next year, and that number could grow by a few more as we get close to the season opener in late April.  This class has exceeded my initial expectations in the first two years, and it continues to gain in popularity amongst fans and competitors.  I’m working on a few more dates, so this early schedule release is subject to change.  Stay tuned in the upcoming weeks for further announcements.”  The preliminary schedule has 24 dates so far.

A large percentage of the schedule will see the traditional sprints race at their home track, the St. Croix Valley Raceway (SCVR), on Friday nights.  The group will make several appearances at other area tracks though.  The first such appearance is a big one, as the TSCS sprints will run as a support division with the World of Outlaws at the Elko Speedway on Friday May 10.  This will be a great opportunity for this class to showcase the close and competitive racing typically seen on many nights with the non-winged sprints in front of a large crowd at Elko.  St. Croix Valley Raceway will take that night off, but the 1/4 mile dirt track will be back in action the following night on Saturday May 11 for the Bullring Blast #1.  The TSCS sprints will race that night along with the WISSOTA late models, modifieds and the UMSS micro sprints.

The month of May concludes with a big show at SCVR, as the traditional sprints will be on the program during the second-ever visit to the track by the IRA 410 Outlaw sprint cars on Friday May 31.  Jumping ahead to the end of June, the next big event for the traditional sprints will be the two-day Open Wheel Nationals at the St. Croix Valley Raceway on June 28-29.  Last year the event was a one day show, and the largest crowd in the history of the track filled the grounds to capacity.  This year it will be expanded to two days.  Further details will be released soon, as the event features the WISSOTA modifieds, midwest mods, UMSS winged sprints and TSCS non-winged sprints.

July kicks off with the only tripleheader weekend of the season, as the TSCS sprints race at SCVR on Friday July 5, and then head north for their first-ever Northern Tour with stops at the Hibbing Raceway on July 6 and the Proctor Speedway on July 7.  On the second Friday in July, the 2nd Annual Traditional 40 will be held.  Last year the feature race ran 30 laps, but SCVR track promotor Ron Bernhagen is optimistic it can be expanded to a 40 lap feature on the 1/4 mile dirt oval.  The non-winged warriors will be part of a special Thursday Night Thunder program at the St. Croix Valley Raceway on July 18 which will also highlight the WISSOTA modifieds in action.  Granite City Speedway hosts the traditional sprints once again in 2013 on Sunday July 21.  In their inaugural appearance last August at Granite City, the TSCS feature came down to a shootout at the checkers with Kevin Bradwell slipping by Rob Caho, Jr. by inches at the finish line.  July concludes with a doubleheader on Friday July 26 at SCVR and Saturday July 27 at the Cedar Lake Speedway.

August will see the TSCS sprints race four times at SCVR, three on Friday nights and once on a Saturday night.  The traditional sprints will be part of the Kouba Memorial, a big event for the UMSS winged sprints, on Saturday August 17.  SCVR will not race August 9 or August 16.  Although a few additional dates could be added to the 2013 schedule, the TSCS sprints are tentatively set to conclude their season during the popular Bullring Blast #2 also featuring the WISSOTA late models, modifieds, midwest mods and UMSS micro sprints on August 30.
The third season for this exciting form of sprint car racing is shaping up to be a great one, as inaugural champion Kevin Bradwell and defending champion Rob Caho, Jr. attempt to garner their second TSCS championship, but a host of strong competitors will provide some serious competition for the top spot.  More information and series details can be found on the UMSS Website at www.umsprints.com by clicking on the blue TSCS logo.