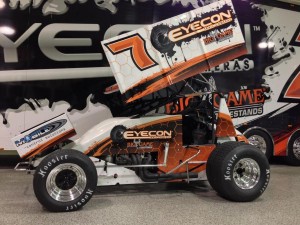 Craig Dollansky and the Eyecon Trail Cameras #7 team returned to Volusia Speedway Park on Sunday evening for the third and final event of the season in Florida for the STP World of Outlaws.  Following a pair of top-tens on the previous two nights, ‘The Crowd Pleaser’ was poised for another strong run looking to defend the finale he won last year.

With qualifying once again first up on the program, Dollansky powered the Aggressive Hydraulics Maxim to the 11th fastest time among the 36 cars in competition.  Starting from outside the front row of heat three, the Elk River, Minnesota native led the field into turn one and never looked back, putting on a dominating performance in the 8-lap race to record his first heat victory of the season.  An inversion of eight for the dash put the Eaton’s Aeroquip Performance Products #7 in fourth and finished in the same position.

In the 30-lap A-Main ‘The Crowd Pleaser’ took the green flag from outside row two.  As the main event got underway Dollansky lost one spot in turn three on the first lap.  As the fuel load started to burn off the MobileStar backed sprinter began making a charge working the lowside in turns 1 & 2 and rim-riding turns 3 & 4.  As Dollansky closed on fourth the top-five ran nose-to-tail until a caution on lap 13.  Following the double-file restart Dollansky again closed on Justin Henderson for fourth until three laps to go when the #7 worked the highside in turn two.  Unfortunately, just as Dollansky was working around the outside of Henderson the two made contact resulting in damage significant enough to retire Dollansky from the main event and erase a strong finish.

The Eyecon Trail Cameras #7 team now returns to the shop in Windom, Minnesota before action resumes with a doubleheader at The Dirt Track at Las Vegas beginning March 6th.