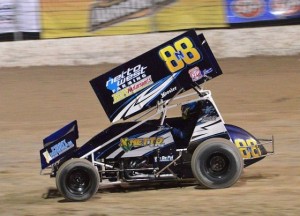 After solely racing 360ci sprint cars in 2012, DJ Netto and his Netto Racing team decided to go all in with their 410ci debut as they headed to Las Vegas, NV to learn from the best, The World of Outlaws.

“Overall it was a great experience, and very humbling,” Netto said. “We went down there to learn as much as we could, and it was overwhelming at times for sure.”

Heading to a track he had never seen before, with an engine package he had only hot lapped, Netto timed his Netto Agriculture/Penny Newman Grain/Boogies Auto Parts machine in 31st quickest out of the 41 cars entered in the event.

Lining up in the eighth spot of his heat, Netto had his rookie moments, and slipped back to the 10th spot, as he followed some of the best drivers in the world, trying to gain some knowledge for the future.

Starting 11th in the B, Netto looked to press a little too hard, as he made a few subtly mistakes during the semi, and slipped back to the 15th spot when the race concluded.

“At times I felt like I had never been in a car before,” he said. “First race of the year, with new engine, and going against the Outlaws was nerve racking for sure, and I had some jitters.”

Back in action on Thursday night, the learning curve continued for the 2012 Rebel Cup Series champion as he timed in last, 40th quick.

Not deterred by his qualifying time, the Hanford, CA driver would climb from his 19th starting spot to a 13th place finish to close out his opening two night’s of action.

“I felt a lot better on Thursday, and we actually moved forward a little in the B,” he said. “Though our trip was nothing to write home about, to be the best you have to race with the best, and I’m looking forward to getting back in action.”

DJ and his Netto Racing team would like to thank Netto Agriculture, Penny Newman Grain, Boogies Auto Parts, Vanderpol Enterprises, and BR Motorsports for their support in 2013.

ON TAP: DJ and his Netto Motorsports team will be back in action on March 15th– 16th at the Thunderbowl in Tulare, CA.